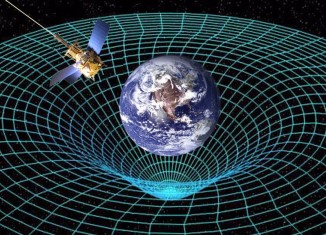 1.3 billion years ago, two black holes about thirty times the mass of the Sun merged together, sending out gravitational waves detected on September 14, 2015 by the Laser Interferometer Gravitational-Wave Observatory (LIGO). After months of checking and rechecking the data, it was finally confirmed on February 11 that it was definitely a gravitational wave that was detected, proving that Einstein was indeed correct about their existence.

Two black holes about 1.3 billion light years away that have masses of 29 and 36 times the mass of the Sun and diameters of about 150 kilometers each started to draw closer and closer together until the speed of the two orbiting each other got up to about half the speed of light. Then, the two merged into one. When combined, the mass of the new black hole is less than the mass of the two prior ones added together. A huge amount of mass was converted into gravitational wave energy. The merge sent a gravitational wave that carried throughout the universe. The wave itself was actually only one-one thousandth the size of a proton, demonstrating how weak gravity actually is when compared to other forces (for example, electromagnetism). These ‘waves’ are ripples in spacetime that stretch and compress space as it passes through.

Just how did LIGO detect the wave? A laser beam was sent into two 4 kilometer tubes and reflected back. Generally, the waves come back exactly at the same time, and the waves cancel each other out. When a gravitational wave passes through, however, the space is bent and distorted. This distortion makes the light not come back exactly at the same time. This small difference in time is measured, and this is what LIGO experienced when analyzing the data. The gravitational wave data was recorded onto a photodetector and converted into a sound that we hear as a chirp. To assure that the detection of the wave was not a false alarm caused by anything local, like a lightning strike, detectors were set up in both Louisiana and Washington. This project had to be extremely precise and accurate to work. Since the difference in distance is so extremely small, the detector must be able to understand the difference. Also, to make sure that the gravitational waves are the only cause for the waves, the mirrors must be extremely stable so they do not move at all. To achieve this, a quadruple suspension system is used to protect the mirror from unwanted vibration.

Now that the wave has been detected, some compare this to the invention of the telescope. According to France Cordova, the director of the National Science Foundation, it will “allow us to see our universe and some of the most violent phenomena within it in an entirely new way.” Now that we know that we are able to detect them, we can work backwards, and through the use of gravitational waves, figure out what is going on in our universe. Instead of seeing the sky with just light, we may be able to see our universe in a whole new way using gravity.

Computer simulation of gravitational waves produced during a black hole collision. The colored lines represent the curvature of space-time caused by the black holes.
Video Courtesy of NASA