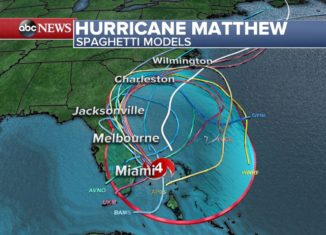 The whole course of the most recently named deadly storm, Hurricane Matthew, lasted for just about two weeks, but it caused over one thousand deaths. Hurricane Matthew – now renamed post-tropical cyclone Matthew – became a named storm September 28th, and a day later it strengthened to a hurricane. On September 30th, it became a Category 5 hurricane that steadily lost power once it made landfall.

Hurricanes strengthen by gaining energy and water vapor when over warm water, such as in the Gulf of Mexico. When the warm air rises, an area of low pressure is formed, causing cooler air around the area to come inside. The air swirls into the low pressure area in a counterclockwise pattern. Global winds usually push the storm system and cause them to come over land where there is no warm water, so the hurricane loses strength. This was the exact case with Hurricane Matthew as it ravaged the Caribbean, but lost some of its steam as it approached the United States.

The storm slowly passed through Cuba, where there were prepared evacuations of about a million people. It was this preparation that saved the Caribbean country from total devastation.

The mass of damage took place in Haiti, which was previously ravaged by an earthquake in 2010. Winds with speeds up to 150mph devastated southern Haiti, where it is believed that 90% of the buildings were destroyed. Drowning may have been the main cause of death. Communication was difficult because of downed power lines and knocked-out cell phone signals. After Matthew, blocked roads created an obstacle for humanitarian aid attempting to come through an already impoverished country.

Even though the storm has passed, the threat is far from over. Floods from the hurricane are causing outbreaks of cholera. Cholera is a serious disease that can be fatal if untreated and spreads through sewage in the water supply. It is not uncommon for outbreaks to occur after flooding. This is why the World Health Organization (WHO) is sending one million doses of cholera vaccine to Haiti, according to Reuters.

At least 1.4 million more people are still in need of assistance in Haiti, according to Reuters, but there are not enough supplies for everyone. Frustrated townspeople who no longer have a home helplessly watch as the relief workers drive past their village to get to other suffering areas. In some areas, protesting and violence broke out as affected people threw rocks and blocked the relief trucks to try to force them to yield supplies.

As the United States watched the horror play out in the Caribbean, preparations began in southern states that found themselves directly in Matthew’s predicted path. In preparation for the storm arriving in Florida, Governor Rick Scott told the population with surprising frankness, “This storm will kill you.” He urged the 1.5 million people in the hit-zone to evacuate immediately and suspended tolling of roads to cope with this suggestion. From the storm, about one million Floridians lost power, but it could have been much worse. The storm faltered away from Florida, lessening the amount of destruction originally anticipated. As of now, the death toll in the US is 21, with 9 from Florida. The other victims were from coastal areas of the Carolinas where many citizens were left to face flooding and destruction in Matthew’s wake.