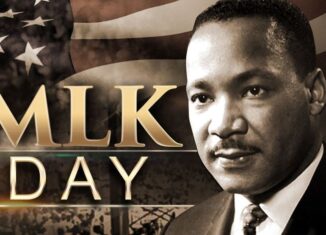 Every third Monday of January, the United States dedicates a day to honor the life and legacy of Dr. Martin Luther King, Jr. Most people know King as a leader for the US Civil Rights Movement and his famous “I have a dream” speech. His accomplishments continue to inspire generations of Americans to become activists and to fight for their beliefs.

King was an activist for equal rights for African American citizens from the mid-50s until his assassination in 1968. He was a strong advocate for peaceful and nonviolent protesting, which set him apart from many other historic activists. He began in Alabama, leading demonstrations against segregated buses and marching nonviolently down the local streets. He was a powerful speaker; textbooks and activists today still continue to quote him. King’s “I Have a Dream” speech given in 1963 is his most notable one, touching the hearts of countless generations. His hope illustrated in this speech was that people would be judged by their personal qualities and not by the color of their skin: “I have a dream that one day this nation will rise up and live out the true meaning of its creed, ‘We hold these truths to be self-evident: that all men are created equal.’” In the year following that speech, President Johnson signed the 1964 Civil Rights Act which prohibited all racial discrimination.

King was the first modern private citizen to be honored with a federal holiday, which was declared in 1986, 22 years after he received the Nobel Peace Prize in 1964. However, it took years for the holiday to filter through to every state; it wasn’t until 2000 that MLK Day was celebrated throughout the nation. Although MLK day is a day off from work and school, MLK Day is the only federal holiday designated as a national day of service to encourage all Americans to volunteer to improve their communities. Whether it is participating in a community project or simply being kind to others, his remembrance is instilled within the goodness of these acts. King’s work has been referred to more than usual this past year, with Black Lives Matter protests in 2020 that fought for police reform and many other matters. The peaceful protests seen today have been frequently compared to the Civil Rights Movement demonstrations; some even thought of the 1950s nonviolent protests as a model to follow since those brought upon change. To some, Martin Luther King Jr Day is just a vacation day, but little do these people realize that their lives would not be the same if it weren’t for his life-changing work. It is extremely important to acknowledge the history and journey of MLK and ensure that his legacy lives on forever.