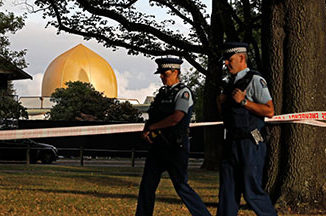 On March 15th, New Zealand, and the entire world faced yet another tragic terror attack. The despicable attack was on two mosques and resulted in the death of fifty people, as well as injuries to fifty others. At around 1:40 PM, worshipers at the Al Noor Mosque were first targeted. The gunman live streamed the first seventeen minutes of the attack on a Facebook Live video. He was also playing “military music” from a speaker throughout the attack. At 1:55 PM, the gunman began shooting through the window of the Linwood Islamic Centre. The attack came as a huge shock to the country of New Zealand, which rarely experiences gun violence. Similar to most other mass shootings, this was meticulously planned. The gunman is white supremacist Brenton Tarrant. He allegedly worked at a gym and traveled to countries such as Pakistan, Turkey, and Bulgaria. Tarrant intended on inciting violence between communities. Tarrant was not on any terrorist watch list and was not previously involved in any previous crimes. At first, it was believed that three other people were involved in executing the shooting. However, it was soon discovered that Tarrant carried out the cruel attack alone. Prior to the attack, the shooter posted a 74-page manifesto online. In this, he revealed his anti-immigrant and neo-fascist views. Despite sharing this online, the New Zealand government did not place Tarrant on a watch list because posts of that nature are, unfortunately, common.

Of the fifty people murdered, 46 were men and 4 were women. The victims aged between 3 and 77 years old. In response to the attack, the affected mosques, along with others around the world, have been receiving constant vigils, messages, and floral tributes. Additionally, schools and other groups performed haka and waiata to honor the victims of the attack. Online fundraisers to support victims and their families have raised over $8 million. In spite of such a treacherous attack on innocent people, nations all over the world have once again come together to mourn and show support for those affected.

Thankfully, New Zealand is not taking this attack lightly, and the government has already made new legislation to prevent any further attack. Almost immediately after the shooting, the government introduced a bill to ban the types of weapons used by the terrorist. According to The Washington Post, “the bill bans ‘military-style’ semi-automatic guns and high-capacity magazines. It also bans semi-automatic shotguns that can be fitted with detachable magazines and pump-action shotguns that can hold more than five rounds.” Unlike the United States, where such gun legislation is highly opposed by organizations such as the NRA, New Zealand gun owners support a change in the hopes that nothing like this will ever happen again. The nation is so insistent on change that, while normally passing a bill of this nature would take months, the Prime Minister said the issue is so crucial that the bill will be in effect by mid-April.