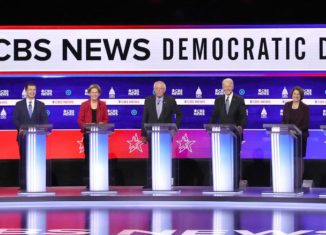 In late February, seven presidential candidates took the stage to try to secure the democratic nomination: Bernie Sanders, Pete Buttigieg, Joe Biden, Amy Klobuchar, Elizabeth Warren, Tom Steyer, and Mike Bloomberg. This debate occurred just four days before the first Southern primary, so for the candidates, this was a chance to secure votes from those who had not yet made up their minds. Leading into this debate, Sanders was the clear front-runner, so a big focus of the other candidates was knocking Sanders from this position.

Primarily, the issue of unemployment was debated. After this economic debate, the candidates are asked questions regarding their relations with people of varied races. Each candidate defends racial equality, which shows promise for America’s future. The next major topic was health care policy. Many candidates took this opportunity to attack Sanders, saying that his plan for universal medicare was too costly and not feasible. Next, candidates debated the best response to gun violence. The debate then switched to the topic of education. Afterwards, candidates discussed affordable housing plans, and then the issue of ensuring health care in rural areas. The subsequent topics included the legalization of marijuana, national security, the Coronavirus outbreak, relations with China, Russia, Israel, and North Korea, and other international affairs. Throughout the series of debates, the candidates noticeably talked over one another, showing clear tension among them.

Overall, the candidates shared one common goal: making sure they nominated the person most likely to beat Trump in the 2020 election. Warren stated that the party would never fully trust Bloomberg, and he would not be likely to beat Trump for this reason. The candidates also expressed fear that if Sanders were to win the democratic nomination, he would be unable to beat Trump – the main goal of the democratic party. Klobuchar puts it best, saying that “if we spend the next four months tearing our party apart, we’re going to watch Donald Trump spend the next four years tearing our country apart.”

Overall, Warren seemed to portray herself as a safer alternative to Sanders, while Bloomberg appeared more steady than in previous debates. Buttigeig solely focused on taking Sanders down, while Klobuchar mainly appeared as a voice of reason on the stage. Steyer dropped out of the race shortly after his failure to be heard in this debate. In the aftermath of this particular debate, Sanders remained the front-runner, with Biden as a close second.