You are here
Home > World News > U.K. Parliament Attack: What We Know 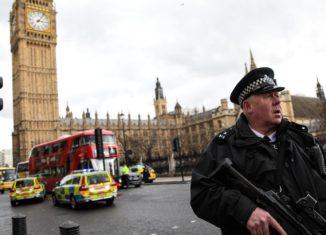 On March 27, 2017, an attacker drove a car through crowds of innocent citizens on the Westminster Bridge before attempting to raid the Houses of Parliament. This was not the first time in the recent months that a vehicle was used as a deadly weapon, and the attack seemed to mimic both the attacks at a Berlin Christmas market and at a Bastille Day celebration in Nice. This unfortunate assault left four people dead and fifty others critically injured.

The dysfunction started at around 2:40 p.m., when the driver of the vehicle crashed into crowds of people that were situated on the bridge. According to one of Britain’s counterterror police officers, Mark Rowley, the driver then proceeded to crash near Parliament, and one man with a knife attempted to enter the political capital. Armed police officers managed to shoot and kill the attacker on the scene. Police officer Keith Palmer, a 48-year-old father and husband, was killed from stab wounds. One woman was even retrieved from the River Thames in critical condition. Rowley stated that police authorities are acting under the assumption that this horrific and deadly attack was an act of “Islamist-related terrorism.”

Shortly after the initial attack occurred, Parliament and the surrounding Westminster area were put on lockdown. Members of the government were instructed to remain inside the main debating chamber of the House of Commons while police investigated the situation, and the proceedings of the day were terminated. According to CNN, the greater part of central London was later included in this lockdown, with passengers on the London Eye Ferris Wheel being stuck on the ride for hours. As a result of this shocking event, London Mayor Sadiq Khan stated that more armed forces would be stationed around the British capital in order to protect the citizens of London from further acts of terror.

It is obvious that the location for this attack was chosen intentionally. Prime Minister Theresa May stated, “The terrorist chose to strike at the heart of our capital city, where people of all nationalities, religions and cultures come together to celebrate the values of liberty, democracy and freedom of speech.”