You are here
Home > World News > The US Capitol Under Siege 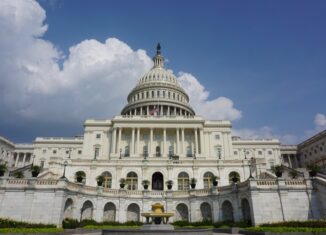 Throughout the past year, the United States has been undergoing election season, which has, as it historically does, divided our country into two different points of view. Political parties have begun to determine who a person is friends with or what brand somebody will buy from. This division hit its peak once President Biden was elected as the 46th president of the United States, but sadly the rift did not end there. On January 6th, 2021, for the first time in U.S history, Washington DC’s iconic Capitol Building was overthrown.

The day should have been filled with celebration as Americans woke up to the news that Georgia had just elected their first Black democratic senator, Reverend Raphael Warnock, and their first Jewish senator, Jon Ossoff, who beat both incumbent Republican senators, David Perdue and Kelly Loeffler. Not only did this news mean a complete change in power within the Georgia Senate, but it was also a big step for minorities all around the world. However, this news was quickly overshadowed by the events occurring in Washington DC, more specifically on Capitol Hill.

There was a certain proceeding that was supposed to occur on that fateful day. On January 6th, the House of Representatives and the Senate were having a joint session, presided by incumbent Vice President Michael Pence, to certify the electoral votes for the 2020 election. This meeting was set to officially declare Joseph Biden as the President-Elect and Kamala Harris as the Vice President-Elect. After speculation and detestation from both President Donald Trump, several Republican Senators and Representatives, and Republican civilians over the results of the 2020 election, it was expected that there would be objections to the vote counts in swing states such as Pennsylvania, Georgia, Michigan, Wisconsin, Nevada, and Arizona. The meeting was set to start at 1 PM in the Capitol Building. Additionally, President Donald Trump was speaking at the “Save America March” at the Ellipse.

Instead, a completely different event occurred. Earlier in the day, at around 11:00 AM, Trump supporters began to gather around the White House, and about an hour later, President Donald Trump gave a speech elaborating on the claims that the election was stolen and false and that there was still an opportunity to overturn the election before conceding. Approximately 30 minutes later, the pro-Trump rally began gathering outside the U.S. Capitol building. It’s participants were covered in Trump propaganda and holding Pro-Trump flags/signs which quoted phrases such as “Thank You President Trump” or “Stop the Steal.” Eventually, the tumult progressed as a group of protestors began to storm the outer barricade west of the Capitol. While this was occurring, the Senators and Vice President Mike Pence – who has spoken out on his disapproval of these events – made their way to the House chamber. Later on, at 1:30 pm, Trump Supporters began the march towards the US Capitol, and soon after, supporters were able to overtake Capitol Police and make it to the steps of the building. Eventually, a mob broke in, and in doing so, they began destroying a national historic landmark. These human beings were cruel and reckless: one even wore a shirt with “Camp Auschwitz” plastered on the front, supporting the Holocaust and Nazi Germany. The violence being displayed within this protest was mind-blowing. Republicans and supporters of the Republican party all over the world were disappointed and ashamed of the events occurring. Eventually, President Trump tweeted,  “I am asking for everyone at the U.S. Capitol to remain peaceful. No violence! Remember, WE are the Party of Law & Order – respect the Law and our great men and women in Blue. Thank you!” Eventually, the National Guard was sent in to put down the riots. Over the span of this day-long event, 63 people in Washington DC were arrested, and police began to push out rioters, securing the building.

The information of January 6th will be consumed by future generations in history textbooks. In doing so, they will be taught that the events of this day were wrong and harmful, but as much damage as was caused, it eventually proved that Democracy can prevail as this event ended with the concession of President Trump.