You are here
Home > World News > The Vice Presidential Debate 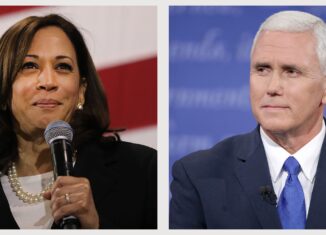 The debate began with the moderator questioning Pence about the Trump administration’s response to COVID-19, which he defended. Harris expressed that under Biden, stricter attempts to contain the coronavirus would be made. Next, the candidates discussed the age of the presidents and what would occur if either of them had to take over, to which neither provided a direct response. The subsequent topic was the economy. Harris relayed information on Biden’s plans to not raise taxes on anyone who makes under $400,000, while Pence tried to trash these plans.

Climate change was the fourth major debate topic, and Pence talked about the importance of managing forests and tried to frame Biden as someone who would adopt the Green New Deal. Harris refuted this claim, and she instead explained that Biden would help the environment without losing jobs. Afterward, they discussed foreign policy. While Harris adopted a policy of forming and stabilizing relationships with other nations, Pence’s discussion dealt more with holding China accountable for the spread of COVID-19.

The next topic of discussion was the Supreme Court Nomination. After that, the candidates discussed racial justice. Kamala called for Justice for Breonna Taylor and explained Biden’s plan to minimize racial injustice in America. Meanwhile, Pence defended the Breonna Taylor decision and expressed frustrations about the riots. Finally, they discussed the election. Pence did not openly commit to a peaceful transfer of power, and Kamala emphasized the importance of voting.

Another noteworthy moment of the debate that became a subject of public attention was a fly that landed on Vice President Pence’s head midway through the debate. This funny moment has become the subject of tweets and jokes about the debate.

Overall, the debate gave insight into the plans of the candidates. Although the moderator lost control at times, it was nowhere near as chaotic as the first Presidential debate. Some policies were able to be explained and heard, but eligible voters should research more into what they heard during this debate before placing their ballots. Post-debate polls show that most believe that Kamala Harris won the debate; however, support for each candidate was raised as a result of the debate.