You are here
Home > World News > What’s Behind the Need to Take a Knee? 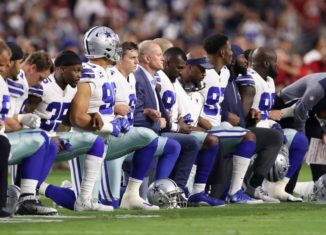 In August 2016, Colin Kaepernick started a movement when he protested the National Anthem during an NFL preseason game.  Kaepernick has said that this protest is meant to take a stand against underrepresented issues of oppression in America, such as discrimination against minorities and police brutality.  This protest took on a snowball effect and developed into a season-wide, controversial trend. NFL players, from bench players to superstars, were progressively moved to take a knee in solidarity with Colin Kaepernick. Soon, sports stars in other sports would continue this protest too, such as when US Women’s Soccer Star Megan Rapinoe took a knee and referred to it as a “nod to Kaepernick.” Some athletes didn’t take the knee, but would hold their fist raised in the air as a symbol of black power.

Sports teams and national leagues had mixed feelings on how to respond to this protest during the National Anthem. Should they suspend the player temporarily? Should they be fired? Are they allowed to be fined? The real question, however, is about rights protected by the First Amendment. Technically, Kaepernick and his followers should be allowed to exercise their right to freedom of expression and peaceful protest. President Trump disagrees, most recently stating that “those sons of (expletive) should be fired.” CNN has also argued that the protest is not supported by the First Amendment as they have no constitutional right to partake in this protest at work… since the football field is technically their workplace.

The problem is that Colin Kaepernick is now not being offered a job to play as a quarterback by any NFL team. Celebrity athletes, like LeBron James, are berating the NFL for its intolerance and discrimination as Kaepernick would be a much better starting quarterback than many of those currently employed. However, teams are afraid of signing Kaepernick for a fear of his controversial presence being too distracting to the team and bad for public reputation.

Protesting during the National Anthem is almost regular now in the NFL. On Sunday, September 24th, the Pittsburgh Steelers received a lot of attention when all of the players stayed in the locker room during the National Anthem, except for former Army Ranger Alejandro Villanueva. Jerry Jones, the owner of the most valuable sports team in the world, the Dallas Cowboys, even took a knee while interlocking arms with players for his team. The Cowboys, however, took a knee prior to the National Anthem being played and then stood with their arms linked in solidarity when the song began. This movement has also become prevalent on social media with the popularity of the #takeaknee trend. As this protest grows, it is a subject of wonder how teams will treat protesters and whether or not Colin Kaepernick will be offered a contract in the NFL.