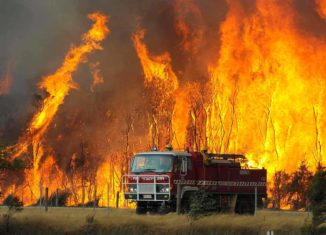 Recently, Australia suffered an unspeakable tragedy. Wildfires the size of South Korea raged across the country as millions of people and animals were displaced from the only homes they’d ever known. As of January 14, 2020, about 25.5 million acres of bush, forests, and parks have been destroyed as a result of these fires. The fires were initially caused by the ongoing droughts in the area and the rising global temperature. Once a wildfire starts, no matter how contained or remote it may seem, the surrounding areas are at high risk due to embers – small pieces of burning wood being blown by the wind – that cause the fire to grow.

Although Australia has an annual wildfire season, these fires are unprecedented as they started in December, an entire month earlier than the usual peak season of late January through early February. The fires, which mainly affected New South Wales (NSW), destroyed more than 2,000 houses and an unknown number of animal habitats. Unfortunately, the Australian wildfires spread more rapidly than ever before and affected more than just NSW. NASA revealed that, at the peak of the insurgence, 70% of the country was covered in smoke. Additionally, NASA discovered that “the smoke had already traveled halfway around the planet by January 8, ‘turning the [South American] skies hazy.’” As of this writing in mid-January, approximately 28 people died from these fires, including four firefighters.

A total of $200 million has been raised worldwide to aid those who lost their homes and those victims who are unable to help themselves, especially the koalas and kangaroos who call  this area home. By mid-January, over one billion animals had already died as a result of these wildfires. According to the New York Times, “some of 25,000 koalas feared death on an island consumed by flames and that a whopping death of one billion animals estimated to have perished across Australia.” The fires may have gotten under control, but the koala population  may have been irreparably damaged. Koalas could potentially become extinct in eastern Australia. It is likely that as early as 2050, they will be extinct since one third of the current Koala population perished because of these fires. As horrible as these fires were, there are ways to make a difference. One way to become involved is to donate. Listed below are just a few of the many organizations designed to help both people and animals suffering from these disastrous fires. Any help can make a major impact in this attempt to save an important part of our world.