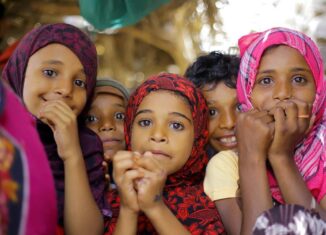 The current humanitarian crisis in Yemen remains the worst in the world. Many people have never even heard of Yemen, so not many are familiar with the terrible conditions taking place. Yemen is a country located on the southern end of the Arabian Peninsula. The country has been in the middle of an ongoing war for the past five years, leaving it in a very dangerous, fragile state. The war started in 2015 between Huthi rebels and pro-government forces. Due to the war, Yemen suffers from a declining economy. With no money, the country struggles to provide basic necessities for its citizens such as food, clean water, and safe shelter. 80 percent of the population, which is 24 million people, is in need of some form of aid. According to the United Nations (UN), more than 200,000 people have been killed in the past five years because of the constant fighting, malnutrition, and disease. They also mention that over 3.6 million people have been displaced and are living in camps.

With COVID-19 now becoming a rapid global issue, the country’s health system has also collapsed. Not to mention, the country’s battle with cholera is not over, killing more than 2,500 people since 2017. Only half of all health facilities in Yemen are actually operating, and most of them are in need of more equipment and staff. The hardworking healthcare workers are receiving no salaries or incentives. The newer generations of children are being seriously impacted by the state of the country. Prior to the pandemic, 2 million children had no education, and 5 million were forced to quit due to the war. Now with COVID-19, 7.8 million children have no source of education, and around 2 million children under the age of five need treatment for acute malnourishment. The malnutrition and zero healthcare access combined with the harshly spreading diseases could possibly wipe out the younger generations that the country is relying on for their future.

Women as a whole are also being negatively affected due to all the crises. They are at a greater risk of violence and abuse, and they have a hard time acquiring healthcare for themselves and their children. The only way to stop the famine and boost the economy is to end the current war. We Americans have no control over Yemen’s war, but there are small ways we can contribute. One beneficial thing to do is donating to UNICEF and signing petitions. UNICEF has already helped almost 7 million people get access to safe water and treated more than 343,000 children from malnutrition. Even if we can’t help individuals first-hand in Yemen, we can still contribute and provide aid to those in need.