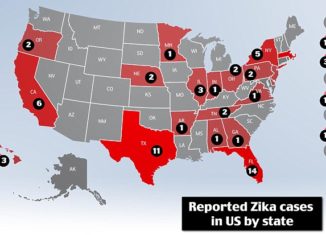 The world first took notice of the Zika Virus when the mosquito infestation in Brazil sparked controversy over the Rio Olympics. While the bite of an infected mosquito is the most common way to become infected, it is not the only way. The Zika Virus is also classified as a sexually transmitted virus despite its most common method of transmission. The virus presents very few noticeable symptoms, which makes it hard to detect and diagnose, but it is incredibly harmful to pregnant women. If a pregnant woman gives birth to a Zika-infected baby, that child can be born with a birth defect of the brain called microcephaly, as well as several other severe fetal brain defects. This leads to problems with the eyes and ears, as well as impaired growth. The Olympics may be over, but that does not mean that the disease has simply disappeared. The most alarming event in recent news concerning Zika is that it is spreading much closer to home than the tropics of distant South America; some cases of Zika have been determined to have originated in  Florida.

In the past year, approximately 3,565 U.S. citizens contracted Zika through travel related situations. This number increased throughout August due to an increasing amount of travel to tropical countries, as well as the Rio Olympics (http://www.cdc.gov/zika/geo/united-states.html). This was bad enough for the United States, as people who come back to the U.S. with Zika can easily spread the virus to others. However, the situation worsened more recently when the first mosquito carrying Zika was found in Miami, Florida. For the first time in the continental United States, the Zika virus has been detected in trapped mosquitoes in a small area of Miami Beach, Florida, according to officials from the area. With symptoms so mild and effects so harmful, it was the first priority of the state of Florida to eliminate any mosquitos carrying the virus before it could spread to humans.

Thankfully, the Floridian officials have been quick to detect and respond to these mosquitos. They have tested more than 40,000 mosquitoes since May, and the three samples found in Miami Beach during September were the first to test positive. Looking forward, Floridian health officials hope to eradicate any possible breeding of these mosquitos in order to prevent any spread of this extremely dangerous virus.