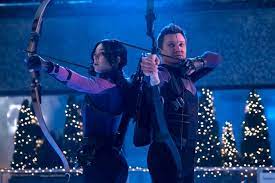 Steve Rogers is the first Avenger, Thor is the strongest, and Hawkeye…well, he’s the most boring. He has been the butt of the joke for years, fighting intergalactic and universe-saving battles with a bow and arrow. Although he hasn’t always been a fan favorite, the first few episodes of the Hawkeye series make you develop a soft spot for Clint Barton. With Hawkeye on the rise, it is very possible that Barton will be the next fan-favorite hero by the end of the show. While the show may cause viewers to develop a new profound love for  Hawkeye, the focus isn’t only on Clint Barton. The series’ main focus is Kate Bishop, a pro archer, and major Hawkeye fan.

Young Kate Bishop was in her room in her NYC apartment during the 2012 Battle of New York between the Avengers and Loki’s Chitauri army. All of a sudden, Kate heard loud noises coming from the streets of the city. As the battle progressed, an alien from Loki’s army scaled the side of the Bishops’ home, blowing a giant hole in their house. Bishop walked through the hole and saw the famous Stark Tower, it had been damaged. Another Chitauri alien started making its way towards her, but she was saved by Hawkeye. Hawkeye’s heroic actions caused Kate to become inspired by him, he was now her favorite superhero. This opening scene is extremely effective in captivating its viewers. It shows that people living within the MCU (Marvel Cinematic Universe) world have unique interactions with heroes. For Marvel fans, it is very cool to see iconic scenes from previous films from a new perspective. It’s things like this that make Marvel Movies so captivating.

The real heart of the show is the moment the main characters’ paths cross at the end of episode one. When Kate Bishop gets into trouble with the Tracksuit Mafia, a group of red tracksuit-wearing criminals, she is wearing Hawkeye’s ‘Ronin’ suit which she had previously stolen from a black-market auction. This controversial suit represents murder and danger in the MCU world. When Clint Barton sees the “Ronin” suit on the news, he immediately decides to take action. When Hawkeyes tries to find the person in this suit he finds Kate. Their dysfunctional dynamic beings here. A mentor/apprentice relationship forms between the two, and the fact that Jeremy Renner and Hailee Steinfeld have infinite amounts of charisma at their disposal makes it entertaining. They bounce off of each other wonderfully. Even with all of this aside, the show is such fun to follow. The Christmas theming and music, the adorable, one-eyed Golden Retriever character, ‘Lucky the Pizza Dog’, funny and dangerous villains, and things like ‘Rogers: The Musical,’ a spin on Hamilton involving the life of Steve Rogers, which Clint Barton goes to see with his family for Christmas. There are also more intimidating and serious characters to balance out the tone, like Maya Lopez, known as Echo. Echo is the leader of the Tracksuit Mafia, a deaf martial artist with a photographic memory. This is just the tip of the iceberg. I’m writing this with three episodes currently out. There will be six in total, and characters such as Florence Pugh’s Yelena Belova, and surprisingly, Vincent D’Onofrio’s Wilson Fisk/Kingpin from Netflix’s Daredevil series will be making their return, creating very dangerous stakes for our two main heroes.

If it wasn’t clear enough, I recommend Hawkeye to die-hard or extremely casual Marvel fans. It serves as a nice break from Loki and Spider-Man’s multiversal shenanigans, giving us a more grounded, street-level superhero story, with a great and heartfelt dynamic between its main characters. I can’t wait to see what comes next in Hawkeye’s remaining three episodes.