You are here
Home > Entertainment > Which Song Took The Title of Song of the Summer? 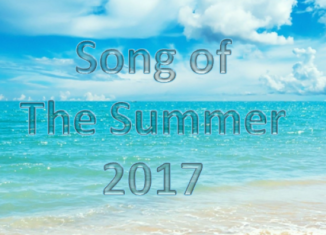 Each summer, there is always that one song that defines those three months when we aren’t in school. It’s always blasted on the radio, blared at those summer pool parties and barbecues, and stuck in everyone’s head. Each year, there is always a winner of this “Song of the Summer” title. According to Billboard, some past songs of the summer include “I Gotta Feeling,” by The Black Eyed Peas, “Call Me Maybe,” by Carly Rae Jepsen, and most recently, “One Dance,” by Drake feat. WizKid & Kyla. So, what songs are looking to take home the bragging rights for song of the summer? Let’s meet the contenders!

First, we have the two most obvious choices: “Despacito,” by Luis Fonsi featured Daddy Yankee and Justin Bieber, and “That’s What I Like,” by Bruno Mars.  Both of these songs have hit #1 on the Billboard Hot 100 this summer and are still battling it now between spots #1 and #2. The spanglish sensation, “Despacito,” has simply been inescapable this summer. Every single time I would turn on the radio, “Despacito” would always be on multiple stations at once. This global powerhouse has broken an insane amount of records, such as being the first video to reach 3 billion views on YouTube, being the first spanish song to reach #1 since the Macarena and tying the record for the longest song to remain at #1 (tied only with “One Sweet Day,” by  Mariah Carey and Boyz II Men, with 16 consecutive weeks). The song that has been duking it out with “Despacito” this summer, “That’s What I Like” by Bruno Mars, is the second single off of Mars’s third album, 24K Magic.  He is an artist that can create hit after hit. “That’s What I Like” is so effortlessly smooth and has such a catchy chorus.  It has just gone 4X platinum and has been one of the few songs to rival “Despacito” and its top spot. It’s no wonder that this single has taken over the airwaves this summer.

A few other entries for the song of the summer race come from two very different people in the music industry: DJ Khaled and Sam Hunt. In “Wild Thoughts,” Khaled enlisted the help of Rihanna and Bryson Tiller. It’s the fourth single off of Khaled’s album, Grateful, and the song samples the 199 hit “Maria Maria,” by Santana. The song oozes the feeling of summer. It has been a global smash, peaking at #1 on the UK charts and #2 on the US charts. Khaled has been on fire this summer. Another song of his, “I’m The One,” featuring Justin Bieber, Quavo, Chance The Rapper, and Lil Wayne, was also on the radio non-stop this summer.  On the country-side of music, “Body Like A Back Road,” by Sam Hunt, was such a country hit that it even crossed over to mainstream top 40 radio. It spent 20 weeks at number one on the country charts, and it even became the highest charting song on the US Billboard Hot 100 since “Cruise,” by Florida-Georgia Line in 2013, peaking at #6. The song’s easy to sing along to lyrics made it a stand-out song  this summer.

The last two entries I’ll include are the oldest song to this group as well as the newest song. “Shape Of You” by Ed Sheeran was released by Ed Sheeran was released by Ed Sheeran on January 6th, 2017 and has been dominating ever since. It reached #1 in more than 35 different countries, including #1 for 12 weeks in the US. Also, it has over one billion streams on Spotify and is the second highest streamed song on the app (the highest streamed song being “One Dance” by Drake feat. WizKid & Kyla). Now it is the end of August and a song that was extremely popular in January is still going strong and remains in the top 10 of the Billboard Hot 100 at #9. There’s no sign of the success of “Shape Of You” stopping anytime soon. The last song that I’ll mention is “Sorry Not Sorry” by Demi Lovato. While it was only released on July 11th, 2017, the song has already made quite the impact. This song dedicated to the haters has quickly gained a lot of momentum. It is the first single off of Lovato’s new album Tell Me You Love Me and the music video, featuring famous stars such as Paris Hilton, and Jamie Foxx, amassed 8.5 million views in just the first day it was released and now has over 84 million views. It has even reached #2 on the iTunes charts. With performances on Good Morning America and the Video Music Awards, this song is going up from here.

So, what is the song of the summer? To me, there clear winner strictly based off of the charts is “Despacito,” by Luis Fonsi, featuring Daddy Yankee and Justin Bieber. It has broken too many records to not get this title. It has literally been in the top spot on the Hot 100 for this whole summer. However, just because the charts say one thing does not mean you have to say the same. While “Despacito” may be the song of the summer according to the charts, I know it was not the song of the summer for me personally and many other people. Each person can have a different  own song of their summer. It’s all about the one song that you can listen to and it can transport you back to late night bonfires with your friends in the middle of July. When a certain song plays, the memories of this past summer should start flooding back to you. So, I ask, what was your song of the summer?