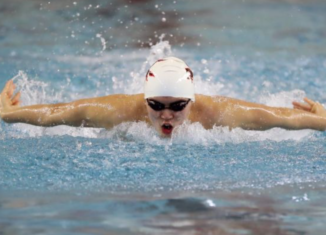 On Saturday, March 4th, Alex Park had some unfinished business to accomplish in the pool. Since fresh- man year, he has worked tirelessly to achieve his goals in swimming. Park’s Coach, Nina Cunningham, said, “Park is an effortless swimmer, but he is also a very versatile swimmer. His accomplishments are something he should be proud of.” During sophomore year, Alex won the 200-yard individual medley. He continued to win the 200 IM again during his junior year and achieved his goal of winning the 200 IM yet again in his senior year. Park won his third straight swim title in the 200 IM at the state level competition.

Park had expectations for this high stakes state level meet over the first weekend in March at NYSPHSAA boys swimming and diving champi- onships at the Nassau Aquatic Center in East Meadow and added, “I knew this would be a tough race. I have a lot of friends in this competition knowing that they would give me a run for my money. But, in the end, I prevailed and I am very thankful.” Park won his third 200 IM state title in 1 minute, 50.28 seconds.

Hills East Senior Alex Park has made swimming history as the anchor in the 200 yard freestyle relay team. In addition, in the medley relay Park was the breastroke leg and swam second. Park along with teammates Daniel Lee, Ethan Tack and Dylan Chan not only broke 6 school records, but won in an All-American consideration time of 1:25.27 in the freestyle relay. Park and his teammates broke the NYS Public Relay Record as well as the school record in this, taking first place at the meet. Park set a public school state record in the 200 medley relay with his three relay teammates in an All-American automatic time of 1:33.42. Hills beat its own record set in the preliminaries the day be- fore of 1:33.82. Park said, “I am incredibly blessed, and it’s not just me who accomplished this. My team, my friends, my family and the one above have helped me. I am very grateful for this opportunity.”

Park has made his mark and is one of New York’s best swimmers. Park said, “This means the world to me, it means a lot. Being in the event, which is what I wanted as a sophomore…I am just speechless.” Alex Park, an All American and Scholastic All American athlete, will be attending and swimming for Brown University in the fall where he will continue to pursue academic and aquatic excellence. Park added, “I chose Brown because Brown University offers undeniable excellence in both academics and athletics. I am looking forward to achieving my goals in and out of the pool. Go Bruno!” On behalf of Hills East and the Thunderbird, we wish Alex the best of luck next year and can’t wait to see what he accomplishes.