You are here
Home > School Sports > Playoffs or Bust 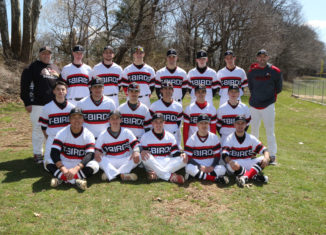 The 2018 Hills East Baseball team is hoping to find themselves back in the playoffs and possibly even bring home a County Championship. The T-Birds will be led by seniors Matthew Hogan (committed to Vanderbilt University), Joseph Litchhult (committed to Cortland University), and Jacob Brigati, along with juniors Reis Henderson and Michael Defillippo. After being league champs and making a strong playoff run last season, the Thunderbirds have a lot to achieve which may be tough due to the loss of crucial seniors from the class of 2017, including Kevin Cavataio, Michael Palazzolo, and Patch Dooley (each of whom continued their careers at the collegiate level).

Coming off a shaky junior year due to back injuries, the Vanderbilt commit Matthew Hogan is destined for the season of his life. Hogan, who is now fully healed, is ready to prove the haters wrong.  When asked about the upcoming season, he explains, “We have a lot to prove after losing all of our seniors. However, I have faith in myself and in my teammates that we can bring the county championship to the Hills East community for the first time since 1967. We all love playing together and are very close off the field. We’re all hungry for the championship. Our potential is through the roof. We all just need to do our part in order to win. ” Hogan is working to win the Carl Yastrzemski Award, which goes to the best public high school player in Suffolk County. The last person to win the award from Half Hollow Hills was Rob Rizzo. Hogan is also looking forward to the MLB Draft in June, where he seems to be high on many scouts’ lists. He is most definitely a player other teams should be afraid of.

The T-Birds will also show their dominance in the outfield, which consists of Nick Gavilla, Jacob Brigati, and Matthew Hogan. Junior Reis Henderson has a big spot to fill as he takes over at shortstop, filling the void left by Michael Palazzolo last year. Henderson’s ability to smoothly field ground balls should make it easy for him to fill the role. However, Hills East may have a tough time against the powerhouse Smithtown East this year. Their dominant pitching staff and lineup depth will be a lot for the T-Birds to handle.

The boys begin their season and journey back to the playoff against Smithtown East. Expect big things from your Hills East Baseball team this year as they are destined for success and hungry for a championship.