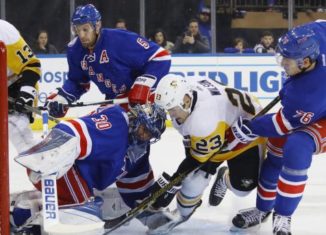 As if all of this wasn’t enough, this division just got even more competitive, and there is no debate that the Metropolitan Division is the toughest one in hockey. Although Washington lost key players, such as Justin Williams, Kevin Shattenkirk, Marcus Johansson, and Karl Alzner, having Braden Holtby and Alex Ovechkin on your team will always make you a competitor. The Pittsburgh Penguins also lost players, notably Nick Bonino; however, they will continue to dominate coming off back to back Stanley Cups with star Sidney Crosby, Evgeni Malkin, and  goalie Matt Murray. The New York Islanders coming off a surge under interim Doug Weight will look to keep that play going, and with the addition of Jordan Eberle and up and coming prospects, such as Joshua Ho-Sang, they will look to return to the playoffs after missing it by just a point last year. The Carolina Hurricanes lacked a number one goalie as well as depth at the forward position, however with the acquisition of Scott Darling and forwards, such as Justin Williams, they will look to lock up a playoff spot for the first time since 2009. The Blue Jackets had their best year in franchise history, which featured a 16 game winning streak. With an identical team and Vezina winner Sergei Bobrovsky, they will look to return to the playoffs.

The New York Rangers defense is largely what cost them what could have been a run to the Cup finals. By signing a top defenseman in Kevin Shattenkirk, their defense is now much more balanced along with their power play, a spot where the Rangers struggled last season. The Devils also struggled last year during what was originally touted as an anticipated good year. They were coming off an 86 point season; however, they finished the next year with 70 points. With the first overall pick Nico Hischer, Holtby-Baker winner Will Butcher, veteran player Brian Boyle, and center Marcus Johansson, they will now be able to compete on a consistent basis. The Flyers barely missed the playoffs last year and came off of a franchise record ten game win streak. Their lack of depth as well as inconsistent goalie play is what cost them a playoff spot. However, with the signing of the second overall pick Nolan Patrick and the signing of goalie Brian Elliott, the Flyers now have the depth to score more goals, and the goalie to stop them.

With all the additions and talent coming into the Metropolitan Division, it is now the most competitive and toughest division in the National Hockey League.