You are here
Home > STEM > The Future Is Now 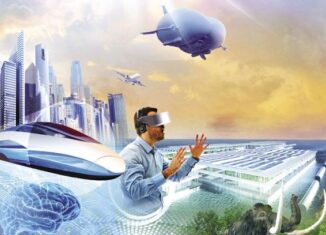 When thinking of the future, people often reference movies such as The Terminator, Star Wars, or Star Trek. Now, more than ever, we are not so far away from what was portrayed in those movies. iPhones, artificial intelligence, and 3D printers were considered “futuristic items” decades ago, but now society uses them every day. What we don’t realize is that these “futuristic items” were created years ago and that we are already living in the future.

One of the most popular names connected with this futuristic reality is Elon Musk. He is one of the richest men in the world mostly due to his creation of the Tesla, the first luxury electric car. The Tesla is a fully electric car, and all you need to do to begin using it is to plug it in and charge it! The car contains never-before-seen features such as a self-driving system, a tablet that can control the car, and a hi-tech door handle that automatically opens and closes. Electric cars also offer great benefits in today’s world. Not only do they look cool, but they emit less pollution and cost less to operate. More recently, there is an increased demand for electric cars and companies like Tesla have waitlists. However, Tesla does not currently have the manufacturing capabilities to keep up with the demand. More and more, electric vehicles are being produced by other top car brands, so lookout for an increasing amount of electric cars in the future.

Another invention of the future is pretty simplistic but also so forward-thinking… self-lacing sneakers! Nike first implemented the idea of self-lacing sneakers in the 1980s. The Nike Air Mags were first seen in the 1989 film Back To The Future II, starring Michael J. Fox, who wore a high-top looking moon shoe with laces that tie themselves. With self-lacing sneakers, all it takes is the click of a button to make them tighter or looser. Although self-lacing sneakers are more expensive than regular sneakers, they are beneficial because they save time in our fast-paced lifestyle. In an interview with GQ Magazine in September of 2018, Nike CEO Mark Parker predicted the future of the sneakers saying, “Self-lacing shoes won’t just be movie magic, or unaffordable collectibles, but the norm.” As technology becomes more advanced, the cost of producing these futuristic sneakers will decrease, and they will ultimately become more available and affordable to more people.

Both electric cars and self-lacing sneakers seem like futuristic concepts, but they are already here. You might think that the Star Wars phrase, “In a galaxy far, far away,” references a futuristic landscape, but with technology advancing so quickly, that galaxy is not so far away!