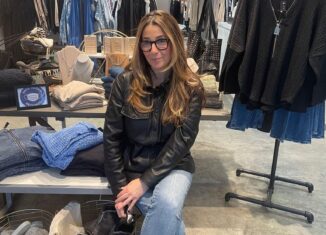 When I first stepped into Storm Boutique, I was in awe of the gorgeous black women’s coat, the display of trendy accessories and the appealing modern color scheme of the store. One of my favorite songs “Lose You to Love me” by Selena Gomez, was playing on the soundsystem, and it immediately created an upbeat and welcoming atmosphere. The owner of Storm, Elle  Bonaiuto, shared her journey with me about how she successfully turned her vision of owning her own boutique into a reality.

After majoring in marketing during college, Elle Bonaiuto went on to become a buyer for over ten years, gaining tremendous experience throughout her training. After several years as an employee, Elle decided it was time to become her own “girl boss”, and she bravely open her own clothing store.  “I wanted to be in charge of my own future”, said Bonaito. Elle sought the advice of many established professionals in the industry, and ultimately decided on Bellmore as Storm Boutique’s first location.

Elle believes that “shopping is an experience”, therefore as her key to success, she develops strategies to create an enjoyable environment for shoppers. “You only get one chance to make a good first impression”, said Bonaiuto. As a perfectionist, every detail from the smell and temperature, to the song and color scheme is specifically set to stimulate happiness for those who step into Storm. Bonauito believes that this first impression is what helps Storm flourish, as customers are likely to return once they have a positive experience.

Bonautio uses social media marketing to generate publicity and sales for Storm. She concentrates on Facebook and Instagram in particular, uploading 5 to 10 pictures a day. In addition, Storm is featured in local coupon books as a promotional effort. After four years of running the Bellmore location, Elle decided it was time to expand. She fell in love with the exquisite Country Pointe Plainview, a newly built lifestyle shopping center, and quickly opened Storm’s second location. When asked if she has further plans to expand, Elle says it’s definitely in the near future, and she may even consider an out-of-state location.