You are here
Home > Entertainment > For Demi & Nick, the FUTURE is NOW 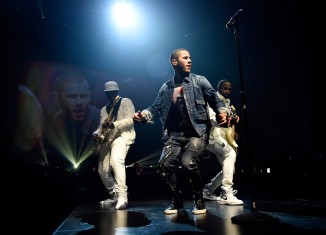 Camp Rock co-stars, Demi Lovato and Nick Jonas, decided to reunite as they traveled around the United States on their Future Now tour. One stop found the tour just minutes from Nick’s hometown with a performance for thousands at the Prudential Center in New Jersey. The concert began with an opening from Mike Posner. After singing some of his major hits, including “Cooler Than Me” and “I Took a Pill in Ibiza,” the crowd was ready for both Nick and Demi to give them an amazing concert. To get the crowd on their feet, Nick Jonas chose to kick off the night with his hit song “Levels,” while rocking his signature jean jacket and shades. Nick got a positive reaction back from the audience; they went wild in response to his flashy dance moves and outstanding high notes. His performance proved to his fans that he is no longer a shy Disney star, but a bold, confident, and cool rockstar.

Since Jonas was performing only a few minutes away from Wyckoff, New Jersey, the town where he was raised, he thought it would only be right to bring a special surprise to his concert in order to give back to his community. Nevertheless, after wooing the crowd with a handful of his well known hits including “Bacon,” “Champagne Problems,” and “Jealous,” he brought up Fat Joe, along with his sidekick Remy Ma, to perform their latest anthem “All The Way Up.” Needless to say, the whole crowd went crazy! Although the crowd was completely captivated by this surprise, Nick was still present on stage to back up Fat Joe with his added vocals and dance moves. Following the surprise act, Jonas got right back into his groove with another one of his most popular tunes, “Chains.”

And then the stage went black. While the crowd was stuck in a state of confusion, the voice of Nick’s long time partner in crime echoed throughout the venue. Demi Lovato began her portion of the show with an elaborate series of neon lights to go along with one of her most famous songs entitled “Neon Lights” that she would later be performing. She then stole the stage with her opening number of the song “Confident.” What better way to express her confidence then through her magnificent outfit? All dressed in a fiery black leotard with boots up to her thighs, Demi certainly was able to show off her new body and stun the crowd. Demi continued to strut her stuff as she sang a few of her other hits, including “Skyscraper” and “Heart Attack.” In addition to performing some of her classics, she also sang her new song “Body Say” which her fans seemed to instantly fall in love with.

At this point, Nick joined her back on stage to play the piano to her singing of “Stone Cold.” Demi was really able to show off her vocal talents which really amazed the entire audience. Not only did Nick help Demi with one of her songs, but Demi also joined Nick as he sang his hit song “Close,” which is usually performed with Tove Lo. After the performance of this song, Nick wanted to emphasize how he would have never gotten where he is today without Demi and their mutual inspiration toward one another. With that being said, he then belted out his most personal song “Chainsaw” from his new album entitled “This Year was Complicated.” To close out the show, Demi performed her summer 2015 hit, “Cool For The Summer,” which kept the crowd singing and dancing right to the conclusion of the show.

Overall, the concert was pretty incredible with both Demi and Nick revealing themselves as truly talented artists. It is obvious just how hard they have both worked to get here. They also were able to inspire many of their fans who were in the audience by showing them how it is important to believe in yourself in order to accomplish your dreams. Although it would have been nice for there to have been an encore with both Demi and Nick on stage together, the two did a fantastic job at making the concert a memorable one!