You are here
Home > Entertainment > Is Kimye Over Forever? 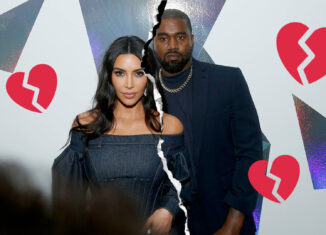 Kim Kardashian West and Kanye West, otherwise known as “Kimye”, could be considered one of the most powerful couples of the century thus far. As many fans know, when Kanye first noticed Kim, he was unaware of who she was and asked his friends, “Who is this Kim Kardashian?” This is where it all started. A few years into dating, Kim and Kanye had their first daughter North and tied the knot within the next year. Throughout the last six years of their marriage, they have welcomed three more children: Saint, Psalm, and Chicago. Over the years, many fans have expressed just how much they look up to Kim and Kanye’s relationship. With Kim being one of the biggest reality television stars and Kanye being a rapper as well as a fashion designer, a large portion of their relationship has been broadcasted to the world.

Although their marriage was perceived as “perfect,” information began to unravel to suggest a very different truth. Pop culture media sources, such as People, Page Six, and TMZ, have recently confirmed that a divorce for Kimye is in the works. Kim allegedly has hired a divorce attorney following the rumors throughout 2020 that Kimye was coming to an end. As many know, Kanye suffers from multiple medical conditions, one of which is Bipolar Disorder. Kim has spent many years dealing with Kanye’s outbreaks and episodes, but it seems like she is unable to handle this uncertainty of his behavior anymore.

It has also been speculated that the couple has been living apart for a long period of time, with Kanye living at his Ranch in Wyoming while Kim has been in California with their children. This was the beginning of the allegations, but not the worst of them. Another rumor that formed, later on, was the idea that Kanye was having an affair with well-known makeup artist Jeffree Star. While this was made top headlines in several news outlets, Jeffree soon put the ridiculous accusations to rest by stating that the rumors were simply not true. Additionally, some news outlets who claim to have received their information from close friends of the couple, Kim and Kanye, or any of their family members, are yet to directly speak out on the issue leaving many to believe that the rumors are in fact true. Fans can’t help but wonder what the world of fame and fortune will be like without the iconic Kimye in the spotlight.