You are here
Home > Op/Ed > Sorting Out the Senate: The Georgia Runoffs 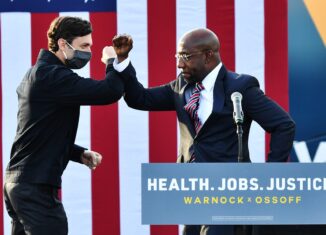 On Election day, all but two Senate seats were elected, with Republicans having a majority in the Senate. However, Georgia still had two seats to be elected and had to wait until January to vote again. In Georgia, candidates cannot be elected without earning more than 50% of the popular vote. If nobody does, the two candidates with the most votes go on to a runoff election. This year, this occurred twice in Georgia, leaving the fate of the Senate in its hands.

Gaining control of the Senate was extremely important for each party. This is largely due to the governmental system of checks and balances. In order for many laws to be passed, they must be voted on by the Senate. Whichever party controls the Senate essentially has the power to pass or veto these laws. If it is split, the Vice President, who is a Democrat, gets the deciding vote. Since the Republicans already won 50 Senate seats, the Democrats had to win both elections in Georgia. This is because if the Democrats won, Biden would be more likely to be able to pass reforms like affordable college and options for government healthcare. However, if the Republicans won, Biden would have a hard time passing these laws because they would be able to block them.

The first runoff election was between Republican candidate David Perdue and Democratic candidate Jon Ossoff. Perdue was the incumbent senator, meaning he had held this position going into the election and has focused his campaign on praising President Trump. Meanwhile, Ossoff was a relatively new face in politics; he used his filmmaking skills to take his campaign to platforms like TikTok. The second runoff was between Republican Kelly Loeffler and Democrat Rafael Warnock. Loeffler was put into office by the governor of Georgia in 2019 after the sitting senator resigned. She owns a WNBA team and had little prior political experience. Warnock is a pastor who worked to increase voting rights. In the end, both Democrats – Ossoff and Warnock – won the Senate seats, flipping the Senate blue and securing the support needed from Congress to move forward with new policies of the present administration.