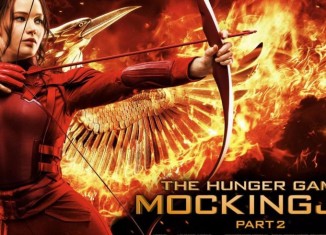 The highly anticipated second part to the final movie of The Hunger Games trilogy finally hit theaters on November 16th, 2015. This culminating film left exactly where part one left off: a closeup of Katniss Everdeen’s face, who is played by Jennifer Lawrence. Lawrence has done an excellent job in all four of The Hunger Games movies by portraying the strong, brave, and dauntless character, Katniss Everdeen, or the Mockingjay as she came to be known over the course of the story. As anticipated, this film shattered box office records as pre-sales for tickets were through the roof. Opening weekend saw droves of anxious fans heading to theatres to see their Mockingjay take on the Capitol and President Snow one last time.

The final installation of this beloved series follows Katniss’s attempt to assassinate President Snow, the head of the government of Panem. In order to achieve this goal, Katniss, along with her rival boyfriends, Peeta, played by Josh Hutcherson, her fellow Hunger Games victor who is recovering from torture and imprisonment at the Capitol, and Gale, played by Liam Hemsworth, the hometown hero who has vowed to help District 13 take down the Capitol no matter what the cost, must try to stay alive. The three, along with a tactical military team created by the leaders of District 13, try to avoid booby- trapped ‘pods,’ which unleash fire bullets and oil floods among other obstacles. They also attempt to escape the ‘mutts’ who lurk in the tunnels below the city while they seek safe haven from the Capitol’s Peacekeepers. The special effects in the movie allowed for a more entertaining experience and kept the audience on the edge of their seats from beginning to end.

As the movie comes to an end, the audience comes to terms with the fact that someone has to win. The revolutionary ending was a great way to wrap up the amazing trilogy. After watching all of the movies, it is easy to see that Katniss Everdeen will forever be touted as a national hero in all of Panem. The acting, writing, and producing were all superb, and Francis Lawrence, director of the film, did a fantastic job in wrapping up the story without straying too far from the author’s original vision. The Hunger Games has become a classic series in every sense of the word. Its tales of victory and defeat, tragedy and triumph, and sacrifice and revolution will withstand the test of time, and it is safe to say that people will enjoy The Hunger Games for many years to come. If you haven’t seen this final film yet, it is definitely worth a trip to the theater!