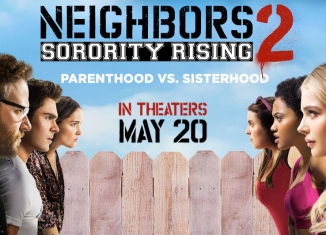 By Jolie Freedman and Nicole Shanker

After the comedy movie Neighbors came out in 2014 to accolades and amusement, it was no surprise that a sequel would follow soon after. The sequel, Neighbors 2: Sorority Rising, was released in theaters on May 19th and has left movie-goers (ages 17 and up) laughing at the familiar hijinks. Neighbors 2 has an amazing cast, including Zac Efron, Selena Gomez, Chloe Grace Moretz, Seth Rogen, Dave Franco, Lisa Kudrow, and Rose Byrne. In the movie Neighbors, a married couple, Kelly and Mac, settle down into a house with their newborn baby and struggle to cope with their neighbors, who happen to be a fraternity from a local college; the conflict turns into a war between the two.

In the sequel, Kelly and Mac are about to move out of their old home and into their new one, but they find out that potential buyers can stop by their current home at any given time which makes them a little bit worried because a new sorority moved in next door. Three girls started this new sorority, called Kappa Nu, with their own rules because they felt that it was unfair that fraternities were allowed to have parties, but sororities weren’t. After realizing they might not be able to sell their house with a loud sorority living next door, Mac and Kelly called the only person they knew who could help them with their problem: Teddy. Teddy was the former president of the fraternity who lived next to Mac and Kelly during the first movie. Although he used to be enemies with Mac and Kelly, Teddy comes back to help them with their sorority problems. The conflict of Mac and Kelly not being able to sell their house and the sorority not being able to pay rent without their parties turns into a war between the neighbors. This movie is a must see movie because the actors worked so well together to create a great comedy that keeps the audience laughing the whole time. If you thought the original Neighbors was funny, then you must see the sequel Neighbors 2: Sorority Rising.

**Disclaimer: If you are under 17, we do not recommend this movie for you.**