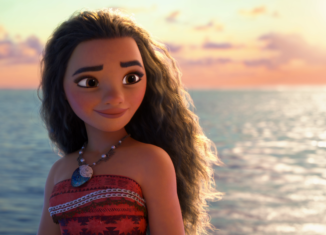 Walt Disney productions introduced the story of Moana on November 3, 2016. Moana is the tale of a girl who sets off on an adventure to save her people. This movie is different than the average Disney movie in that it takes place on the islands of Polynesia. But, like all the Disney movies that we know and love, Moana offers positive messages about empowerment and self-discovery to viewers of all ages. The main character, Moana, also demonstrates courage and curiosity.

Played by Hawaiian actress, Au Li’l Cravalho, Moana is the daughter of the chief of the tribe. She has a very adventurous personality and is constantly warned by her father to be cautious of her actions. Maui, the powerful and mighty demigod played by Dwayne “The Rock” Johnson, joins Moana on a quest across the Pacific. With the crops of the island failing to grow and the fisherman being unsuccessful in catching any food, the people of the island are struggling to survive. Moana soon learns that the reason behind the sudden decrease in food is that Maui stole the heart of the goddess, Te Fiti. The only way for Moana to bring the island back to reality is to bring Maui back to Te Fiti. Together, Maui and Moana battle the double-dealing ocean and all of the sea monsters and pirates that it has to offer. Throughout their journey, Moana and Maui learn what love, friendship, and teamwork can accomplish when used together. Not only do Maui and Moana beat the impossible odds, but Moana also discovers her true identity.

This film helps to show what can be accomplished when people work together. This movie endeavored to inspire children all over the world, and I feel that Disney achieved its goal in creating an inspirational movie. The brand-new movie Moana is enlightening to audiences all over the world. If you have not seen the movie yet, I suggest that you head out to a theater near you and catch Maui and Moana in action.