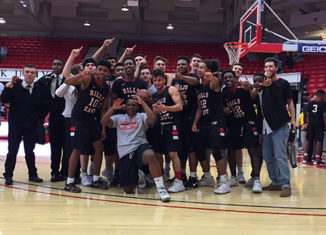 After a great season, the boys varsity basketball team finished with an overall record of 16-4 and 12-2 in League 2. They were crowned Co-League Champions alongside Bay Shore, who also finished 12-2 in league play. The T-Birds last won the League title back in 2014 when they advanced to the Final Four.

On Saturday, February 18th at 2pm, the basketball team played against Ward Melville High School. The T-Birds were ahead throughout the first two quarters and then took a big lead in the 3rd. Their opponents came back in the late fourth quarter, however, they did not score points to triumph. The game ended 75-59 with a High School East victory. Savion Lewis led the team with 33 points and nine assists in an HSE (no. 3) Class AA quarterfinal win over Ward Melville (no. 6). Shane Dean scored 12 points, and Kendall Nero-Clark had 10 points and 13 rebounds.

The team advanced to the Suffolk County AA semifinals on Saturday, February 25th where they played against Brentwood. At the start of the fourth quarter, the teams were tied at 51. Junior guard Savion Lewis scored 10 points during an 8-0 run that put the T-Birds in the lead (61-51) with 4:18 left on the clock. In addition to Savion’s numerous baskets, Kenny Mathurin drilled the first three pointer of his varsity career. In the end, Mathurin scored a total of 14 points, Kendall Nero-Clark scored 16, Julien Crittendon scored 11, Kioni Nedd scored 6, and Savion Lewis scored an amazing 28 points. The game ended 75-59, allowing Half Hollow Hills East to advance to the Suffolk AA Final for the first time in school history. Savion Lewis stated, “That was our expectation – to make history.”

Throughout the game, no one on either team compared to the level of skill exhibited by Savion. Maneuvering his way through the other team’s defense,  Savion successfully made many layups. He also made 11 of his 15 free throws. He scored seven points and had a steal and assist during a 12-0 run. In a recent interview with a news reporter, Savion stated, “My teammates trust me, and they know I’ll come through in the clutch. I’m a winner.”

The finals took place on Thursday, March 2nd at 8 pm at Stony Brook University. The Thunderbirds played in the county championship against No. 1 seeded Bay Shore. Both teams gave their all throughout the game as they came neck and neck in scores before the final buzzer. With 25.1 seconds left on the clock, the score was 62-61 in East’s favor. The clock read 14.6 seconds when Kioni Nedd stepped up to the foul line and nailed both of his free throws raising the score to 64-61. Now with 2.1 seconds left, Bay Shore’s player went to the line to shoot two free throws. He made one and let the other hit off the backboard in hopes that his teammates would get the rebound and shoot thus tying up the score. However, HSE’s Zach Schwartz grabbed the ball and secured East’s victory. Savion Lewis had 19 points, 7 assists, and 3 steals. Julien Crittendon had 18 points and 4 steals, Kendall Nero-Clark had 14 points and 8 rebounds, Kenny Mathurin had 9 points, and Kioni Nedd had 4 points.

For the first time in our school’s history, HSE represented Suffolk County AA in the Long Island Championship. Making it there was an accomplishment and fighting to the very last second solidified this team’s position as the best there ever was donning that Thunderbird basketball uniform. The T-Birds put up a strenuous fight on March 12th at the Long Island Basketball Championship against Nassau County Champions, Westbury. With 15 seconds on the clock, the score was 59-60 with the Thunderbirds in the lead. Less than 10 seconds were left in the game when Westbury player Jalyn Dunlap grabbed a rebound and made a basket, advancing Westbury into the state semifinals with a score of 61-60. Savion Lewis scored 12 points, Julien Crittendon scored 29 points, Kenny Mathurin scored 6 points, Kendall Nero-Clark scored 4 points, Shane Dean scored 3 points, Sean Lulley scored 2 points, Kioni Nedd scored 2 points, and Zach Schwartz scored 2 points. It truly was a team effort.

Although  Hills East did not advance beyond this point, it is safe to say that the entire HHH community is incredibly proud of this monumental accomplishment. These boys came together as more than just a team; they played like a family. Throughout the entire season, they had each other’s backs and consistently gave 110%. Congratulations on making history; this season is one that will not soon be forgotten.

Call it a Cinderella story. Call it a long-time coming. Call it victory. Call it what you will, but history was made last night as the Hills East Thunderbirds defeated the #1 seed Bay Shore for the coveted title of Suffolk County Class AA Champions. Led by Coach Peter Basel, the T-Birds gave it their all in front of a crowd of over 2,000 people at Stony Brook University, and for the first time in the school’s history, they walked away as champions. With less than a second left on the clock, the HSE Thunderbirds got in that one last shot, resulting in a 64-62 victory over the Marauders. For this group of boys, this was the game of the year; for Hills East fans and alumni, this was the game of a lifetime. On behalf of the entire Thunderbird staff, congratulations on this momentous achievement! The T-Birds will go on to face the winner of the Nassau Class AA championship game on Sunday, March 12th at 1:30pm at Stony Brook University. Come on down and support your Hills East T-Birds!