You are here
Home > Entertainment > Your New Quarantine Netflix Binge: All American 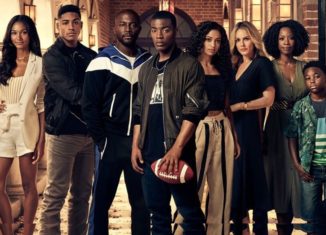 Do you love TV shows filled with drama, an intriguing plot, and amazing characters? If so, All American could be the perfect show for you! The fairly new TV drama created by the CW, but now available on Netflix, All American, has quickly grown in popularity and has stolen the hearts of its viewers. The show first premiered on the CW in October of 2018 and has continued due to overwhelming support from fans. Season one soon became available on Netflix, and Season two was released on March 17, 2020, allowing new fans to binge while looking for new TV shows during this time of quarantine.

All American focuses on the main character, Spencer James, balancing his life between his impoverished hometown of Crenshaw and his new home in luxurious Beverly Hills, where he received an opportunity to play football for the town’s high school team. The show follows Spencer’s journey while facing conflicts regarding family-life, relationships, gang violence, and football. He creates a close connection with the Baker family, including the head football coach at Beverly, Billy Baker, his wife Laura, and their twin high school kids, Jordan (Beverly’s quarterback) and Olivia. A few other notable characters include Leila Faisal (a friend from Beverly), Asher Adams (another member of Beverly’s football team), and Tamia Cooper, known as “Coop,” (Spencer’s lifelong friend from Crenshaw). While watching, viewers meet many other characters that add to the intriguing plot of the show and keep fans deeply invested in their journeys.

I watched season one prior to our prolonged, unexpected break, and I was extremely excited to hear that season two was released on Netflix a few weeks ago. The show takes you on a ride of many emotions, while being captivated by every minute of each drama-filled, exciting episode. I highly recommend this show if you are looking for a new series to start, especially if you enjoy high school dramas, excitement, football, and binge-worthy TV shows!