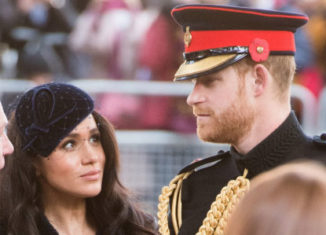 The Duke and Duchess of Sussex stunned the world and the royal family when they announced that they would be splitting their time between the U.K. and North America while striving to be financially independent. However, in reality, their exit was not very abrupt due to the tensions being at an “all-time high” within the royal family during the holidays. When the Queen gave her annual Christmas address, she was surrounded by photographs of her family, including Prince Charles, Camilla Parker Bowles, Prince William, Kate Middleton, and their three children, but Prince Harry, Meghan Markle, and their son Archie were missing. It was a contrast to last year when the Queen proudly displayed two images of Markle and Harry, including an official wedding portrait and a family snapshot of them celebrating Charles’ 70th birthday. What further caused tension in the royal family was when Prince Harry and Meghan Markle revealed that they would not attend the royal family’s annual Christmas traditions in Sandringham. Instead, they decided to celebrate the holidays in Canada with Meghan’s mother, Doria Ragland. Additionally, there have been many reports that Kate Middleton and Meghan Markle didn’t get along very well, and that Prince Harry’s relationship with his brother, William, was deteriorating since the royal wedding.

When the Duke and Duchess of Sussex announced the departure, they wrote in an Instagram post, “We have chosen to make a transition this year in starting to carve out a progressive new role within this institution…We intend to step back as ‘senior’ members of the Royal Family [and] plan to balance our time between the U.K. and North America, continuing to honor our duty to The Queen, the Commonwealth, and our patronages… [It will provide] our family with the space to focus on the next chapter, including the launch of our new charitable entity.” In their announcement, they mentioned giving Archie space to grow up outside of the royal family but stated that they will still follow their traditions. The birth of their son was one factor that encouraged them to step down since Markle grew up outside of royalty. Another reason for why they might be leaving is because of negative press. They have been getting quite a lot of harsh criticism about their marriage and their overall behavior, so this might have pushed them further to get away from the media. Meghan’s outsider status as a “biracial American” left her hurt and feeling unsupported by the royal family. The two felt the need to do what’s best for them and their son.

Supposedly, the royal family and the Queen did not know about their decision to step down based on a tweet from a royal correspondent for BBC News. The tweet, from Jonny Dymond, confirmed that, “no other member of the Royal Family was consulted before Harry and Meghan issued their personal statement tonight, the Palace is understood to be ‘disappointed’.” After a personal family meeting with the Queen and the princes, Harry, Charles, and William, she released a public statement saying, “My family and I are entirely supportive of Harry and Meghan’s desire to create a new life as a young family. Although we would have preferred them to remain full-time working Members of the Royal Family, we respect and understand their wish to live a more independent life as a family while remaining a valued part of my family.” Overall, Prince Harry and Meghan Markle’s separation from the royal family was quite a shock to the world, but it wasn’t entirely unexpected due to the previous tensions and declining relationships within the palace.