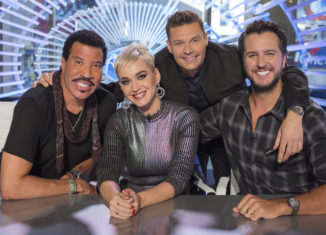 It seems like just two years ago I was here writing about American Idol’s farewell… well, that’s because I was. Just a year after American Idol said goodbye, there was already talks of the search for a superstar making its return. In May of 2017, it was officially announced that ABC had won the bidding war for American Idol and that it would be coming back to television screens the following year. After Idol’s comeback was announced, rumors ran rampant about who the judges could be. Any former judges? Or maybe a past contestant or even a past winner? The first judge was announced on May 16, 2017: international pop superstar Katy Perry. The other judges that followed were music icon Lionel Richie and country superstar Luke Bryan. These three judges each fit a role for the show. Perry is the worldwide pop star, Bryan is the country star, and Richie is the industry veteran. As expected, Ryan Seacrest was tapped to return as the host of the revival. Seacrest is the only person to be on the show all sixteen seasons and is the glue that holds Idol together.

American Idol returned on March 11, 2018, and exceeded rating expectations with over ten million viewers. It was very apparent that the judges developed a bond and were comfortable with one another. It’s almost like there’s a father/children relationship with Lionel, Luke, and Katy. As in the past, the first few weeks were the auditions. The audition cities were New York City, New Orleans, Los Angeles, Nashville, and Savannah. Although there were some worries that they would not show the “bad” auditions anymore, that was not the case. There was definitely a good amount of poor auditions mixed in with the good auditions. After the few weeks of auditions aired, it was on to the very stressful Hollywood Week.  There are three different rounds of Hollywood Week: groups of 10, Solo Round, and Group Round. Group Round is definitely the most infamous round. Can these singers handle being in a group and handling the pressure that comes with it? Also, it is crucial in Group Rounds to make sure that the contestants do not forget the lyrics! Following Hollywood week, there was a Showcase Round in front of a live audience. This was dubbed as “The Final Judgement” to cut the top 50 down to the top 24. This was where the cuts started to hurt and be controversial. Some of the contestants eliminated included standouts Thaddeus Johnson, Carly Moffa, Laine Hardy, and Maddie Zahm. The most recent round has been the Top 24 solo round and celebrity duets. The contestants were split into two groups and got to perform a solo song as well as a duet with a celebrity. These celebrities included Andy Grammer, Rachel Platten, Bebe Rexha, and Pat Monahan from Train. After the judges deliberate, the top 24 will go down to the top 14 and the live shows will begin. Right now, we are in the middle of the live shows and just found out the top 10. The top 10 includes Catie Turner, Dennis Lorenzo, Michael J. Woodard, Jurnee, Gabby Barrett, Ada Vox, Maddie Poppe, Michelle Sussett, Cade Foehner, and Caleb Lee Hutchinson.

There are many standouts this season. There’s Catie Turner, the quirky 17-year-old who stunned the judges at her audition with the original song “21st Century Machine.” Also, there’s Cade Foehner, the rocker from a small town in Texas. Maddie Poppe’s ethereal vocals are incredible and Perry even said she sees some of herself in the musician.  I think these three have the potential to take it all.

It is true that there was criticism met when the decision was made to bring American Idol back so soon after its “farewell season.” However, avid fans, like me, knew they were going to be just as invested in the revival. I firmly believe Idol is still superior to other singing competitions, such as The Voice, because Idol has something they don’t have: the power to make a superstar. No one from Idol’s rival has truly become a superstar. While Idol has brought now-household names like Kelly Clarkson, Carrie Underwood, Jennifer Hudson, and Adam Lambert (just to name a few) into the industry, one cannot say the same for its rival singing competitions that have come and gone. Also, Idol will always be THE original. While things can be imitated, they cannot be duplicated. At the pinnacle of Idol’s success, it was untouchable. There was just some magic to the idea of watching someone grow before your eyes and potentially seeing their dream become a reality. With Idol, you truly got to know the contestants and developed greater empathy towards them. I believe that all other singing shows today have a lack of comfort, and there is a disconnect between the contestants and the audience. American Idol makes their dreams our dreams; we become a family. In its sixteenth season, Idol is still going strong, and, dare I say, it is one of the most talented seasons yet. Thank you, ABC, for brightening the lights on American Idol.