You are here
Home > HHH Community > Not Just a Moment in Time, but a Movement for Change 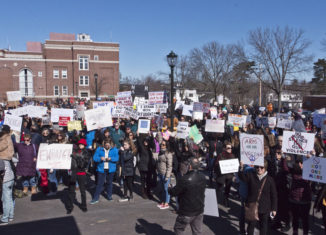 By: Alexa Foodim and Kayla Menkes

Countless posters, empowering music, and voices screaming for change gathered behind Huntington Town Hall at 11:00 am on March 24. “March For Our Lives” Long Island was one of the 800+ marches that were held in each state throughout the country exactly one month and ten days after the horrific events in Parkland, Florida. We gathered with moms, dads, teachers, grandmothers, and Long Island’s persistent youth as we took the first step in demanding change.

March For Our Lives was created in response to the tragedy that occurred in Parkland, Florida on February 14, 2018. Students at Marjory Stoneman Douglas transformed their grief into action in order to facilitate a movement. Their mission statement reads:

“The mission and focus of March For Our Lives is to assure that no special interest group or political agenda is more critical than a timely passage of legislation to effectively address the gun violence issues that are rampant in our country,” (marchforourlives.com).

Students all around Long Island took it upon themselves to create a sister march on Long Island. 3,000 Long Island citizens, along with 800,000 other Americans across the nation, joined together to fight for a change.

The event began with the pledge of allegiance, reminding participants that we are all unified with the love for our country. Following the pledge, Dan Krochmal sang his song, “Pride Before the Fall.” It was not only the empowering lyrics of the song but also the connection between strangers that sparked a feeling of unity. He wrote the song just days after the incident in Las Vegas, but his message is just as relevant to recent events. Krochmal’s song was not the only form of music that was written in response to the tragedy. Well known Broadway stars Lin Manuel Miranda and Ben Platt recorded their song “Found Tonight” arranged by Alex Lacamoire. This song, a genius combination of Hamilton and Dear Evan Hansen lyrics, was an instant hit on iTunes. The combination of lyrics creates a message of hope and love. A majority of the proceeds were donated to the “March for Our Lives” campaign. Another song, “Shine,” written by Sawyer Garrity and the Stoneman Douglas Drama Club, was also popular among grieving Americans. Music became a uniting factor between those at the Long Island March and marches across the country.

After the song, the organizers read the list of every student that was killed in school since the Columbine shooting in 1999. The length of time between the first and last names read was appalling. Various speakers took the stage. Some monumental speakers included Paul Gutenberg, former congressman Steve Israel, and Melissa Biegel. Gutenberg was the uncle of 14-year-old Jamie Gutenberg who was killed in the Parkland shooting. He was able to keep Jamie’s memory alive by speaking about the legacy of talent, empathy, and love that she left. Melissa Biegel was the sister of one of the victims, Scott Biegel. She easily connected with the audience as she describes the feeling of loss and grief. She expressed her struggle to continue with her life without her brother and without an uncle for her children. Both Paul and Melissa were able to create emotional sympathy throughout the audience which was crucial for developing the emotional perspective of unexpected, horrific death from gun violence. In order to give a political perspective on the situation, Israel discussed what citizens can do to help by participating in voting. He explained how the issue of gun violence will be crucial in the upcoming primaries.

In addition to the speakers that were on stage, there were also events surrounding the main event. Various booths were set up for citizens to visit and learn more about the issue. Some of the booths included a voter registration booth, a “moms demand action against gun violence” booth, and a booth to raise money for the Scott Beigel memorial fund. These booths promoted action and encourage citizens to get involved.

The March for Our Lives in Washington, with over 800 sister marches including the one we attended on Long Island, was the largest single day protest in the history of the nation’s capital.

Photo courtesy of Dana E. Richter from the Long-Islander News