By: Skylar Gronich and Jordyn Schioppo

On April 12, 2018, High School East hosted its annual National Art Honor Society Induction ceremony. Otherwise known as NAHS, National Art Honor Society is a nationwide program that recognizes kids for their skills in varying art programs. This year, Hills East’s chapter of NAHS welcomed 64 new inductees into this incredible organization. NAHS has about 200 members, making it the largest honor society in our school. Every year Mrs. Uttendorfer and the board of NAHS dedicate many weeks of tireless planning for the induction ceremony. This year, each member of National Art Honor Society tie-dyed their own NAHS shirt, which allowed them to represent their individuality and unique artistic style. The many colors seen in the tie-dyed shirts were not the only representative of the expression of each artist, but also stood for the four pillars of National Art Honor Society: red for passion, yellow for creativity, green for integrity, and blue for the dedication. In addition to the colors of the shirts representing the pillars, they also symbolized the era of the 60s, during which creativity and newfound imaginative spirit characterized the time. The NAHS advisor, Mrs. Uttendorfer, remarked that “our induction ceremony truly reflects the creative spirit of the society. It’s colorful, filled with music, and displays a unique passion for the arts that I have not witnessed in any other high school.” The idea of unique spirit and creative ideas is something that was valued during the 60s and epitomizes all that our NAHS chapter stands for!

In addition to their colorful shirts, the new inductees created their own masterpieces on mirrors. Each mirror was beautifully different in their own way. Students used their various talents in photography, drawing, painting, architecture, and design to create their mirrors, and each one was a reflection, not only literally, but also symbolically, of their artistic efforts and passion. Leading up to the ceremony, students and teachers were able to stop by and purchase the artwork. The sale continued after the induction, where parents and family members bought raffles and their favorite mirrors. A great deal of money was raised to support the art scholarships that NAHS awards to deserving art students who will go on to study art in college. 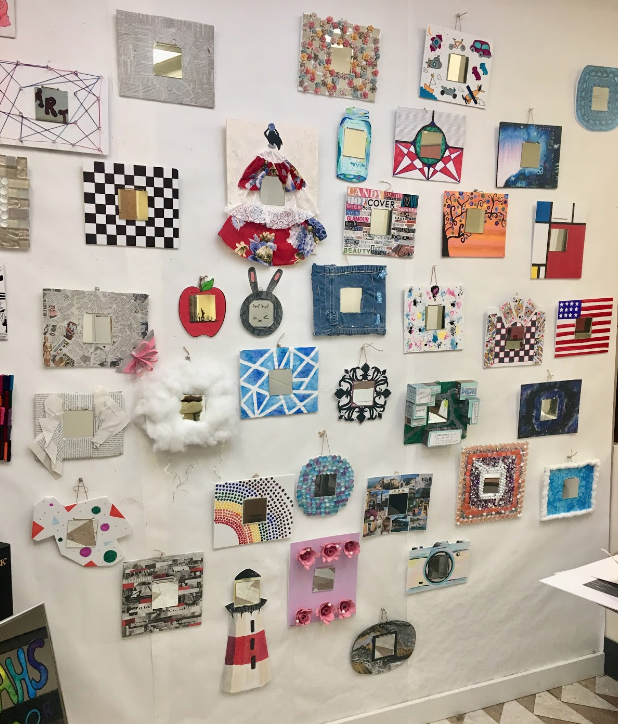 This year’s keynote speaker at the induction ceremony was Mr. Jim Cavanagh, a High School West graduate, and current Melville resident. Mr. Cavanagh spoke about his experiences throughout his career as a graphic artist and art director. He also displayed his artwork, which included drawings, portraits, and digital photography. It was very interesting to learn how Mr. Cavanagh developed a love for art, almost by accident, later in his high school years and continued his passion for art throughout his professional career.

A huge congratulations go out to Jess McLaughlin, Marissa Vazquez, Johnny Bloom, Mark Amorello, Taylor Cohen, Casey Goldstein, and Julianna Moreland on their scholarships and awards. The HHH community is excited to see what will come for all of you in the future. An immense thank you goes out to Mrs. Uttendorfer, the NAHS executive board, and all of the faculty involved in the art community, for making this night a success.

As members of the NAHS executive board, we also contributed to the countless hours that went into the induction and watched the rest of the board members do the same. We are both extremely proud to be part of such an amazing organization and to watch our fellow classmates lead the incoming and previous members.

NAHS has contributed to many different activities and raised money and awareness for not only the NAHS scholarships and other NAHS functions, but also for many other school-wide events such as the annual Safe Halloween and 17 Days of Kindness in honor of the 17 victims of the Parkland shooting. Every single one of these events this year has influenced each artist involved in National Art Honor Society and has lead the organization towards where they are today. With great support from the community, tremendous effort from all students involved, and growing numbers of inductees every year, the National Art Honor Society Induction and events of 2018 thus far was nothing less than a great success.