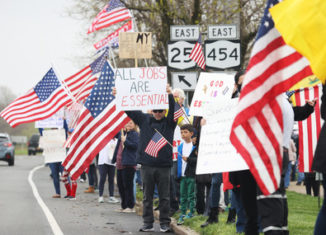 The amount of protesters calling for the reopening of the U.S. economy has been growing. People throughout the nation have been gathering and rallying for the reopening of the economy and protesting stay-at-home orders. During most of these protests, people are ignoring social distancing guidelines and not wearing masks. The government is debating on how to resume economic activity safely without increasing the number of Coronavirus cases. Protesters on Long Island started to emerge near Valley Stream, Commack, and Carle Place to show support for big and small businesses who are suffering because of this crisis.

On May 1st, individuals in Commack were seen holding American flags, Trump posters, signs, and chanting “U.S.A!” near an intersection of Jericho Turnpike and Veterans Memorial Highway. Around a hundred people came together at a closed mall, claiming that their rights were violated by the lockdown. One man even said that protesting to open up the economy is more important than his health. Many called for the instant reopening of all businesses, and some even called for schools to be reopened, even though Governor Andrew Cuomo announced that they will be closed for the remainder of the school year. Police observed the protest, but did not enforce social distancing guidelines since it is handled on a case-by-case basis. Small businesses might collapse and non-essential working people will lose a significant amount of money if the economy stays closed.

Despite this, is it really safe to reopen services amid the serious pandemic? The increase of protests during this two-week period is caused by the decline of Coronavirus hospitalizations. Governor Cuomo says hundreds of new cases of COVID-19 surface daily, despite the decrease in hospitalizations. Protesters without masks and standing closer than six feet to each other have a greater risk of catching the infection from someone who might be asymptomatic, or shows no symptoms. Steve Bellone, Suffolk County Executive, shared his thoughts about the protests. He states, “It is very important that we get our economy back going, but we need to do it in a safe way. We need to protect public health at the same time, because the worst thing that could happen here, is that you start to reopen the economy and then we see a surge in cases.”

Long Island’s thirteen town supervisors met up virtually on May 1st and discussed the eventual reopening of parks and beaches for the summer. Some believe that the economy should reopen as soon as possible, and others think we should still stay in quarantine and postpone opening the economy even further. There is no one right side because both sides present logical evidence to support their beliefs. Whatever your views are, the top priority is to remain safe during these unprecedented times because you never know what could happen, and there is a lot at risk.