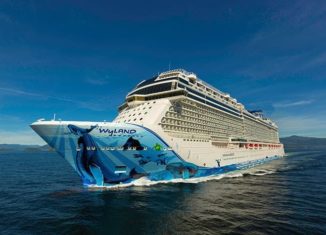 Distinguished citizens and community members: Today, I temporarily eulogize the vessel known as the Norwegian Cruise Line (NCL) Norwegian Bliss. I remember it well, albeit not as entirely fondly as I had envisioned prior to embarking. I ventured aboard the grand and exquisite Norwegian Bliss cruise to sail away on an unforgettable girls trip with my best friends and our mothers. NCL has been based in the United States since around the years of their birth, thus about 50 years, to finesse an unforgettably positive experience. This specific breed of cruise, known for its magnificent facilities and entertaining ambiance, unfortunately builds unfulfilled expectations. Although it had its several moments, the Norwegian Bliss lacked the friendly ambiance and inviting staff to which I looked forward to finding in this caliber.

As a 17 year old world traveler, unfortunately not versed in the relaxing beach genre, I had hoped that the teen club would be a place where I would be able to have fun building long lasting friendships. This was not the case. Since the teen club had the age range of 13-17 years old, many of the upperclassmen did not go. The club was filled with middle schoolers, not exactly the ideal friend for a high schooler, making the upperclassman feel as though we were creepers and not contemporaries. The minimal capacity exacerbated the ridiculous age expanse and dissuaded lines of hopeful youth to change their minds before entering. Notwithstanding the previous, I fortuitously made great friends elsewhere, such as the beach and the subpar Internet Cafe.

As a highschooler, my homework, of course, accompanied me on the cruise, as did the demand for online interconnectivity. Even though my mother had paid a substantial price for the wifi package (so that I could do my work), the connection waivered. Luckily, this was next to the Starbucks, included in our equally as pricey drink package.

Highlighting the deficient internet and the waves of an unanticipated storm was the opportunity to try every drink on the Starbucks menu in size venti. The caffeine surge charged my spirit and will to enjoy myself more than the exorbitant charge of the drink package, proving to be the highlight of this trip for a coffee connoisseur like me. I tried several mouth-watering drinks all the way from the splendiferous Cold Brew with Salted Cream Cold Foam (my new favorite) to the classic Caramel Macchiato to the delectable Iced Peach Green Tea Lemonade. I highly recommend them all. The stormy waters, however, foreshadowed the current industry decline and preempted my present Starbucks withdrawal.

I do not, however, continue to crave the cuisine of the Norwegian Bliss, with several exceptions which satiated my palette. My friends and I enjoyed eating at the restaurants and multicultural buffet, of course, after submitting to the “washy washy” of the hands imposed routine, for which at present we are most grateful. With our package, we were granted reservations at three of the several specialty restaurants on board, yet the included buffet reigned supreme in our taste. We ate at the hibachi restaurant which was delicious and provided us a memorable experience by an exuberant singing and culinarily talented young chef. Among the most talented we had ever experienced, in deep contrast to the mediocrity exhibited in the steak and italian restaurants we also frequented. The spectacular sides in the restaurants were the only laurels of the latter experience. It was obvious to us that the chefs, especially of the “Italian restaurant,” were not prepared for the sophisticated and spoiled palettes of New Yorkers. The margherita pizza was obviously cheese pizza, and the pasta, drowned in sauce, resembled more soup then al dente delight. Although the chef did come out to apologize, the unexpected wavey storm overtook his generosity and offer to rectify three mistakes.

The trilogy offered as disembarkation to NCL’s private island and two others in the Bahamas region, provided the highlight of entertainment along with a drunken passenger misbehaving in front of a group of a thousand people. The island was beautiful, the food and drink were plentiful, and the sunshine brilliant. This is the time that we were able to make our friends and contacts and enjoy what NCL was really about. As for the misbehaving passengers, they made for a good laugh and were promptly removed by the ship’s security. I heard that the plays were wonderful, but due to the slow service at dinner, I along with my friends had to make the quick decision to forgo a potentially subpar play for teenage fun. I am glad I did. So it was not perfect, but amongst the mini disaster, the event lived on.

We wish them a quick and thorough revival in the aftermath of the COVID-19 catastrophe and only hope that Norwegian Cruise Line rises to the level of some of their counterparts, including Carnival and MSC, to offer hospital services if our society should so require. May they rest in peace until their peace transitions once again into voyage.