You are here
Home > Lifestyles > The Transition From Camper to Counselor 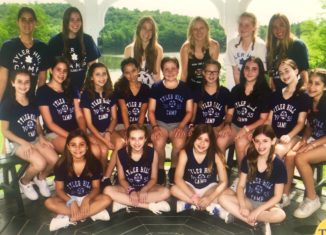 For the past 10 years, my summer home has been a sleepaway camp in Pennsylvania called Tyler Hill. After every summer ended, I would immediately begin counting down the days until the next summer. Camp is a place filled with spirit, fun activities, and, most importantly, friends! My friends have and will always remain the reason why I return back to camp every summer. However, for the first time this summer, I wasn’t living with my 10 best friends.  Instead, I was living with and caring for girls going into 7th grade. Naturally, I was nervous going into camp this summer because this was a very big transition. I couldn’t imagine myself being a counselor, and I was so used to my camper life at Tyler Hill. I knew that I was about to go through a big change and that it was definitely going to take some time for me to adjust to it.

Before the campers arrived, there was a week of orientation for us counselors to receive training, get advice, and meet new people. At orientation, I attended informational sessions that explained how to react in certain situations and in emergencies. They told us what division we had and who our co-counselors were which made everything seem more real. I was living in a bunk with three other counselors. I knew one of them from my previous summers at camp; however, the others I had just met and were from Pennsylvania and England! Another part of orientation is unpacking the campers, which is definitely not the highlight of my summer. It was difficult to organize the extreme amount of belongings that my campers brought for the seven weeks. However, unpacking my campers made me very appreciative for all of my counselors throughout the years who did the same for me. It was interesting to be a counselor because, for the first time, I was experiencing camp from a very different and new perspective.

When my campers arrived, I was beyond excited to get to know all of them. I recognized most of them from previous years, but I never had relationships with them. They were equally as excited to meet me, which made me realize that I was going to have a great summer. There were 35 amazing girls in my division. Little did I know, but seven weeks later, I would consider all of them my new best friends! I couldn’t imagine being with other girls. I helped them with any issues they had and tried my best to not just be their counselor, but to also be their friend. After a short time, my nerves disappeared, and I felt completely comfortable being a counselor. It was also comforting to know that my best camp friends were going through the same transition as me and that we would be there for each other throughout the whole process. I will admit that there were days when all I wanted to do was be a camper again, but in the end, I couldn’t have pictured the summer any other way. I am even considering returning next summer to be a counselor again! While change is always hard, it is important to not let your nerves impact you too much. That is something that I definitely learned coming out of another great summer at Tyler Hill Camp!