You are here
Home > School News > Embrace, Empower, and Encourage 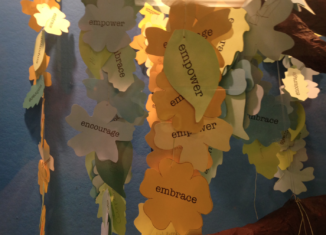 Peer Alliance Day 2017 was another great success at High School East! On Wednesday January 11, the Peer Ambassador group came together to create an outstanding exhibit that aligns with the program’s values. This year’s campaign revolved around “The three E’s,” which includes embrace, empower, and encourage. The members of the Peer Ambassador program delivered a strong message that being a genuine person who looks out for others is the key to excellence at HSE and in life. A tree branch with flowers that had these three words on them was displayed behind the peer ambassadors and are essentially the fundamental principles that can be followed to establish a safe and enjoyable academic environment for everyone who walks through the doors of HSE.

This year’s event took place right outside of the West Gym. Students passing by the display were able to learn how to be more compassionate and inspiring individuals. First, students and faculty members came to the table and took a flower/leaf with one of the three E words on it, preferably whichever they felt most connected to. Then they signed their name on the back of the flower or leaf in order to make their mark and show their contribution to being a better person and doing good within the school community. Next, they were told to roll dice, and depending on what number they rolled, they were given a challenge regarding the word on their flower. For example, those who rolled a 3 for encourage were told to “include someone shy.” If you had an embrace flower/leaf and rolled a 6, you were challenged to smile at someone in the hallway, and if you had empower and your dice read 2, we asked students to think confidently before taking their next exam. These suggestions were willingly accepted by the HSE teachers and student body, which ultimately made for an informative, positive day.

After speaking with Jeremy Erdheim, a senior member of the Peer Ambassador team, he expressed his thoughts on this year’s Peer Alliance Day. He said, “The point of Peer Alliance Day was to spread the 3 major themes that we want the school to embody: embrace, encourage and empower. If each person can accept one of the challenges in their category, then maybe that would be enough to make someone else’s day. We wanted to bring awareness that these simple acts could influence others greatly, and maybe next time, they won’t need a challenge to ask someone to sit with them at lunch.”

Mrs. Norris’ Art classes did an amazing job at creating the tree branches that our motivational flowers and leaves will be hanging from. This creation will stand in our school as a symbol that inspires activism and change in the way individuals act toward one another as well as the way they feel about themselves. Thank you to everyone who showed their support on Peer Alliance Day 2017 and contributed to its success!