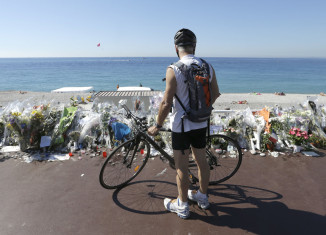 Terrorism is a word that appears in the news far too often nowadays.  From Orlando to Nice to Istanbul and more, various sudden acts of terror occurred around the world this past summer. The number of casualties and injuries that have resulted from these attacks is astonishingly high. Unfortunately, the entire world has been forced to grieve over the losses of innocent family members, friends, and fellow citizens.

June is a month in which LGBTQ+ pride is advocated and celebrated nationwide. However, on June 12th, 29-year-old terrorist, Omar Mateen killed 49 people and wounded 53 others in Pulse nightclub ― an Orlando club that is geared towards LGBTQ+ individuals. Mateen was ultimately shot and killed in a shootout with police at the site of the attack. It is known that the radicalist was put on a terror watch list twice, but no prior evidence was found to prove that he was a source of danger. As stated by CNN, it is likely that Mateen was motivated by Jihadist propaganda on the internet to pursue this radical action, but he was not directed by an outside group of terrorists to attack. While Mateen was holding the clubgoers hostage, he even called 911 to pledge his devotion to the Islamic State, as well as other opposing radical groups. This awful event is considered the worst violent act specifically targeted at members of the LGBTQ+ community and as one of the worst terrorist attacks in the United States since September 11th, 2001. According to Jonathan Capehart from Newsday, this violent action was “by far the worst mass shooting in American history.” Citizens all around the world held vigils to grieve for the tragic losses, and the Eiffel Tower was lit with colors of the United States flag on one side and the rainbow flag on the other. This mass shooting gained a lot of attention worldwide and has encouraged many Americans to fight for proper gun control to be addressed in the upcoming election. Since common citizens are voicing their opinions on this extremely prevalent issue, gun control is finally starting to get the attention that it deserves, but why did it have to come to this?

It was just a few short weeks later when France found itself shedding similar tears. Bastille Day is a French national holiday that honors the Storming of the Bastille during the French Revolution. Every year, French citizens observe this holiday on July 14th by attending parties, parades, and other social events. Unfortunately, the celebration was anything but happy this year when Mohamed Lahouaiej Bouhlel rammed a truck into a crowd in Nice, killing at least 85 people and injuring hundreds of others. As viewers of a fireworks display dispersed from the Promenade des Anglais, Bouhlel shot the innocent pedestrians and began to plow the 20-ton truck through the crowds without remorse. Bouhlel was ultimately killed by French officials, and the attack was terminated. According to CNN, it is a viable theory that Bouhlel had planned the attack, with the help of others, for over a year. A media source from ISIS claimed that the individual who carried out the attack was a member of their network, although there was no evidence demonstrating direct contact between Bouhlel and the terrorist group at any time. It is known, however, that Bouhlel has been in trouble with the law for violence since 2010. Earlier this year, the attacker was arrested for gun violence and sentenced to six months in jail, but his sentence was later suspended. As a result of this horrific event, President François Hollande requested that the state of emergency initiated after the attacks in November 2015 be continued for three more months. Leaders of countries all over the world expressed sympathy and support for their fellow nation through official statements, as well as social media, after the brutal terrorist attack. Hollande optimistically stated, “France is afflicted, but she is strong, and she will always be stronger than the fanatics who want to strike her today.”

Despite the drastic increase in American airport security that was put into place after the terror attacks on September 11th, 2001, airports around the world are still common targets because of the large concentration of people in one place. On June 28th, a series of suicide bombings and shootings were carried out by at least three terrorists at Atatürk Airport in Turkey. The three attackers most likely came from Russia and Central Asia. As a result of this attack, 45 people were killed and more than 230 people were injured. According to CNN, the prime minister of Turkey believed that ISIS was responsible for the attack, but the terrorist group did not own up to anything. Turkish officials believe that the attack might have been fueled by the increasing attempts of the nation to stand up to the threat of the terrorist organization. To the surprise of many individuals, the airport was reopened to the public just a few hours after the attack. This was most likely done in an effort to show whoever initiated the attack that Turkey would not let this tragedy hurt its business, tourism, or hope. Since Turkey shares a border with both Iraq and Syria, it is relatively easy for extremists to enter the nation and take advantage of the lack of security. In the past few months, Turkish officials have attempted to control the border more strictly in order to combat the threat of ISIS and to appease their allies in the United States government. According to ABC News, the United States officially stated that it is “steadfast in our support for Turkey as we continue to confront the threat of terrorism.” Hopefully, the Turkish government will make protection against ISIS the number one priority so that terrorism is prevented in the targeted nation.

Unfortunately, these are only a few of the acts of terror that have plagued our world this summer. According to Richard Allen Greene from CNN, 365 terrorist attacks occurred around the world in the first 29 days of June. Germany, France, Palestine, Turkey, and the United States were all struck at some point this summer. It is nearly impossible for authorities to predict which individuals will commit such horrific crimes despite the fact that many terrorists, such as the attackers in Orlando and Nice, have previously been in trouble with the law. It is absolutely necessary that all nations unite in order to combat the forces of terror and increase public safety worldwide. Weapon and gun control must be addressed not only in the United States, but also in other countries around the world to ensure that the lives of innocent people are not taken. Unity needs to be a top priority in order to decrease the use of the word “terrorism” in the news.

Photo courtesy of the npr.com