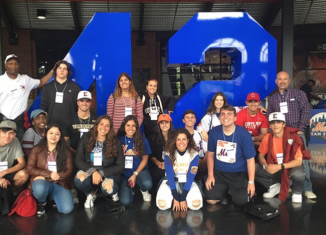 By Jolie Freedman and Austin Krach

When a majority of people think about High School East’s new implementation of a broadcasting program, the daily morning announcements shown in their first period classes are the first thing that comes to their minds. However, most students are unaware of the multitude of other opportunities that this program provides. Furthermore, Broadcasting 101 has ultimately developed into an extensive program filled with action-packed excitement that every student is recommended to try.

One major component of this class is the magazine. While half of the class is busy working on the morning and extended announcements, the other half is producing segments that combine to form a 5 minute magazine video. One to two segments are filmed everyday, and every Friday, a new magazine is posted up on youtube. Some of the segments include spotlight TV show/movie, artist of the week, school event, community event, current event, today in history, sports recap, and health information of the week. Additionally, students have the opportunity to augment their writing and public speaking skills by working on the magazine.Go check out HHH HSETV on youtube to see what all the hype is about.

One branch of this unique program is the Broadcasting Club. This club runs biweekly on Mondays after school. This club, as well as the class, is run by Mr. Scorcia. In the club, Mr. Scorcia along with the members, discuss new ways to make HSETV even more colossal. Recently, an Instagram and Twitter have been created, so make sure to follow @HSETV for active news updates. You might have also noticed some of the “Multimedia Productions” signs hanging up around the school. Next year, this class will be called Multimedia Productions in order to improve students’ adeptness in a wide variety of areas. Students in Broadcasting also have the chance to produce live stream videos. Some of the live stream videos that have been filmed are HSE basketball games, the College Essay Tips presentation at High School East, an HSE band performance, and the Unity Day fair.

In April, HSETV decided to take on its most daunting project yet: a public service announcement about bullying. The New York Mets partnered with CAPS’ Bullying Prevention Center with efforts to “strike out bullying” through a competitive contest. This contest was open to all Long Island schools. However, there can only be one winner. The first place prize winner receives tickets to a New York Mets game, a chance attend the batting practice of the Mets, and the once in a lifetime opportunity to go on the field for a ceremony before the game. The stakes are very high, so the HSETV team wanted to make the best video possible. Mr. Scorcia’s broadcasting class spent weeks brainstorming ideas for the video as well as storyboarding each detail to make the video second to none. On Friday, March 31st, it was finally time to see our ideas come to fruition. The broadcasting team went out on the baseball field during periods 7 and 8 to film the video. This project brought the whole High School East community together as both the varsity softball and baseball teams pitched in by performing as the baseball team in the video. In addition, all of the 8th period gym classes sat in the stands and played the crowd in the video. The crowd cheered on the batter for the most part, except for a few select bystanders (played by the HSETV team) who instead shouted expletives at the batter. In the end, the batter was able to persevere and have a great game. The message of “strike out bullying” was very obvious in the video. We think that HSETV’s project was a homerun; hopefully the judges do too!

Congratulations to Mr. Scorcia and his Broadcasting class who are this year’s winners of CAPS (Child Abuse Prevention Services) Strike Out Bullying video contest in partnership with the New York Mets. Their winning public service announcement was premiered at Citi Field before the May 23rd game. As contest winners, the students were special guests of the NY Mets at a pre-game ceremony and even got to go on the field. In addition to the ceremony, the students attended the Mets batting practice and received “swag bags” courtesy of the NY Mets that included a t-shirt, a glove, and a drawstring backpack among other items. The Mets won the game, and the class had great seats to see it all happen. It was definitely an experience that will always be remembered. Way to go T-Birds!

Hopefully, HSETV’s new projects will continue to inspire more students to take Broadcasting 101 in the future and appreciate all that this incredible class has to offer.