You are here
Home > School News > Do you Have the HS“E Factor”? 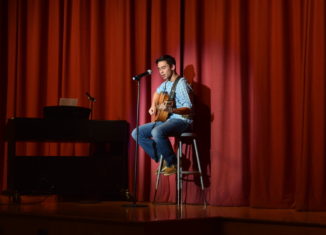 In 2011, a talent show was born at High School East, and the rest is history. As is the case with all of the great talent shows of old, this one eventually took a break. Then, on Tuesday, January 19, E Factor made its triumphant return thanks to the combined efforts of the Tri M music honor society and AASO! These HSE organizations teamed up with VH1’s Save the Music to promote the continuation of music education in schools. E Factor’s goal is to allow students to perform and show off their talents in a supportive setting. Students performed in all different ways; some performed with a band, some did solos, some came in small groups, some were singing and some even did a little acting. The talent between the walls of HSE is astounding, and this event was just another testament to that fact. The small group category blew everyone away as all performers were beyond talented. Unfortunately, there can only be one winner. In second place was a trio consisting of Hannah Gerber, Rachel Sacher, and Alyssa DeVilla. But it was Frankie Altamirano who brought home the first place prize. A big congratulations goes out to everyone who performed; you were all amazing, and the judges had a very difficult job on that Tuesday evening.

A new High School East a cappella group, LowKey, run by Dani Stauber did something a little different for the show. Because there were no other large groups performing, LowKey split up into boys and girls and had a little competition of our own. It was so much fun and a little bit competitive, of course. After each half performed, we came back together and performed two songs as a group. The Step Team also entertained the crowd, and they were just as fantastic as the competitors. E Factor was a fun and easy way to show off one’s talent while having fun and raising awareness for music education. Hopefully, this tradition will continue on for years to come. If you didn’t get a chance to come this year, put next year’s event on your calendar now because this is definitely one of those events that you must attend during your high school career!