You are here
Home > School News > Fanfare, Football, and Some Friendly Competition 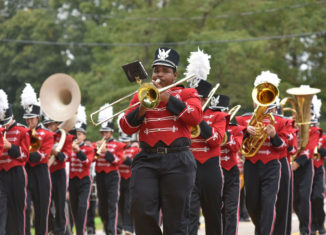 In traditional HSE fashion, the T-Birds kicked off another school year on Friday, October 7th, with the annual fall pep rally in preparation for the weekend’s homecoming festivities! Walking into the pep rally and hearing the marching band energized the students as they got excited for what was about to take place. Each grade had the opportunity to decorate their designated area of the bleachers in correspondence to their class theme. This year’s themes were as creative as ever. The Freshman were the 60s, the Sophomores were Saved by the Sophs, the Juniors were That 70’s Class, and the seniors were It’s a 90s thing. In addition, each sports team for the fall season was introduced and walked proudly into the gym to the applause of their classmates and teachers. There were also amazing performances by High School East’s performance teams, including the step team, the cheerleaders, and the kickline. It was obvious that all of the performing teams put in a lot of effort towards their amazing routines that entertained all in attendance. From the Trump and Hillary impersonations to Beyonce, pep rally also consisted of the homecoming nominees performing small acts in order to persuade people to vote for them as Homecoming King and Queen. The lucky winners of the performance were the fake Trump and Clinton as they left the entire student body double over in laughter. And with that, HSE puts another great pep rally in the books, filled with T-Bird pride and spirit. 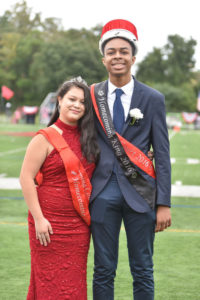 On the following day, High School East hosted their annual homecoming game against High School West, which kept the school spirit level up high. Early that morning, there was a parade where students walked from High School West to High School East with their grade’s float. The floats were put together by members of student government and represented their grade level theme. The fun continued at 2pm with the kickoff of the homecoming football game. The bleachers were filled and much of the student body was present, alongside families and alumni, to support their fellow Thunderbirds. The students stood up and cheered loudly to help the football team put up a fight against Huntington. The marching band, the cheerleading team, and the kickline team also had awesome performances that entertained the fans during half time. The homecoming King and Queen, along with the entire homecoming court, were introduced. Although Hills East played and fought hard in the football game, they weren’t able to pull a win over Huntington. However, this did not stop the homecoming game from being a blast!

Following the game, homecoming weekend culminated with Competition Night, an annual tradition at High School East where representatives from each grade participate in a series of relays and events in order to win points for their class. Some of the events consisted of the over under relay, the tug of war, and the dizzy izzy relay. With everyone in their class shirts, T-Bird spirit was overwhelming. Overall, it was a great night of making memories with friends while participating in some good, old-fashioned competition.