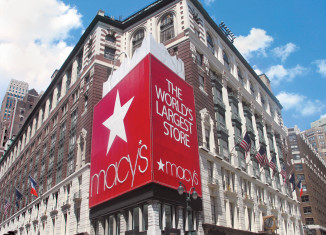 No one would have guessed that the small, fancy dry goods store that opened on the corner of 14th Street and 6th Avenue in New York City in 1858 would grow to become one of the largest retailers in the world. Known for its creative merchandising, Macy’s was the first to introduce such products as the tea bag, the Idaho baked potato, and colored bath towels. By November 1902, the store had outgrown its modest storefront and moved uptown to its present Herald Square location on Broadway and 34th Street, establishing an attraction for shoppers from around the world. With the store’s 7th Avenue expansion completed in 1924, Macy’s Herald Square became the “World’s Largest Store,” with more than one million square feet of retail space. It is one of the only stores in NYC that takes up a full block! Every Thanksgiving Day, people tune in from around the country to watch the famous Macy’s Thanksgiving Day Parade. This procession features floats with famous characters, Broadway highlights, and the much-loved Rockettes, capturing the attention of viewers at home and on the streets.

Recently, Fashion Marketing students from High School East were fortunate to visit this iconic department store. They went on an extravagant tour through Macy’s and learned about the history of the fashion. The main floor of Macy’s is vast, overwhelming, and very impressive. What’s fascinating about this store is that they’ve kept old traditional aspects of the original store, including their escalators- still made out of wood unlike modern department stores. The fashion students also learned about product placement, specifically why certain merchandise are located on certain floors of the store. For instance, the Christmas stations are purposely placed on higher levels so people have to go through the entire store to get there, hopefully shopping all the way. In addition, they were informed that the food products on each level of the store correspond with the intended age-range of the clothing available on that level. For example, McDonald’s is placed near children’s clothes, while Starbucks is placed near adult clothing. In addition, Macy’s uses their famous Thanksgiving Day Parade to promote their store. These are all marketing strategies that allow Macy’s to draw in large amounts of customers and make the greatest profit possible.

It is clear that visiting Macy’s is well worth the trip into New York City to learn about the history of merchandising/marketing as Macy’s is well known for its niche in popular culture and the diversity of its merchandise.