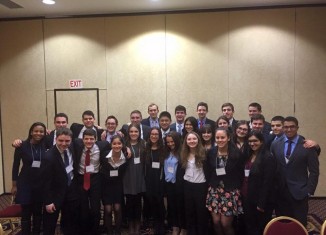 On Saturday, February 27th, 2016, Half Hollow Hills High School East’s “We the People: The Citizen and the Constitution” team traveled to Albany, NY to compete at the New York State Competition for the opportunity to attend Nationals in Washington D.C. “We the People” (WTP) is a high school academic program (formally known as the Law, Youth, and Citizenship Program), where a select group of AP U.S. Government and Politics students are given the opportunity to engage in civil discourse and become highly knowledgeable about the Constitution, Constitutional Law, and Diplomacy, as well as the foundations of the U.S. government and the world in which we live today. WTP combines both the regular AP Government and Politics curriculum with an additional WTP curriculum, simultaneously preparing for both the AP exam in May and the regional, state, and national competitions.

The class is divided into six “units” – each unit honing in on congressional hearing questions and spending months studying and preparing for each competition. The six unit groups prepare four-minute opening statements in response to two congressional hearing questions. Judges then ask students follow-up questions to test the depth of their knowledge on the topic in a six-minute question and answer period. At the state competition, each team competes against other top winning teams from their respective regions.

The keynote speaker for this year’s competition was Christopher R. Riano, a Constitutional Law and Government professor at Columbia University and practicing Constitutional Lawyer. He gave a speech noting the importance of engaging in civil discourse and being able to have such an in-depth understanding of the U.S. Constitution at such a young age.

HSE’s We the People team has typically performed excellently at home and away, often rising to the national level under the guidance of Mr. David Pitman – our AP Government-WTP instructor. In December 2015, our team walked away with a “First Place” win at the regional competition on Long Island. In February, we earned a very close “Second Place” at the state competition, unfortunately ending our chances to participate in the national competition. When asked about the results at the state competition, Mr. Pitman said “Despite our loss, I was very proud of this year’s team. They did everything I asked them to do and performed very well in Albany. This is a special group of students that make you feel optimistic about the future of our country.”

As a member of the team, I can most definitely say that gaining proficiency with sections of our Constitution and finding documents takes both time and dedication. However, for students that are passionate about these subjects, the opportunity to transform your classroom learning environment into such a scholarly experience is priceless. Most members of our team are truly passionate about U.S. Government and Politics, and this knowledge gained will likely never leave us. Often incorporating current events into our daily discussions, we become very informed, and it allows us to step away from the rote memorization of many classes and truly learn how our Constitution impacts each U.S. citizen, how to apply the concepts we’ve learned to political and legal observations in everyday life, and how to eloquently debate government and politics. It is undoubtedly very challenging in the best way possible and a refreshing change from the typical classroom curricula. It has been a highly formative experience for my peers and me. I am confident that most of them would join me in encouraging any junior interested in government and politics to look into participating on the “We the People” team. Congratulations to the entire team on a job well done at both Regionals and States!

Photo Courtesy of HSE We The People Team