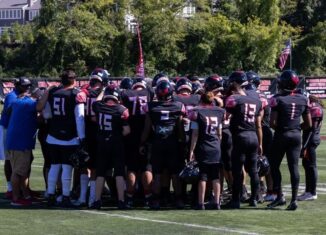 Football is a game played with an offense and a defense where the offense tries to score touchdowns by getting the ball into the endzone. There are 11 players who play on both sides of the field, offense and defense. The term “12th man” refers to a different group of people. The “12th man” are the fans and a team’s fanbase. To some teams, the fans contribute to the team’s success. The fans bring energy and help make the game more exhilarating.  They play a tremendous role in helping a team succeed and win games.

Your 2021 Hills East Thunderbirds have been one of the most successful football teams in all of Long Island. Why have they been so successful? Their success comes from their new head coach, Alexander Marcelin. Coach Marcelin, a former Hills West graduate, was a star outside linebacker. Coach was fortunate enough to receive a scholarship to Bethany College, a division III school located in Lindsborg, Kansas. After graduation, Marcelin bounced around the CFL, the Canadian Football League, playing for the BC Lions. After the CFL, Marcelin played for the Salina Bombers, an indoor football team. Throughout his career, Coach struggled with injuries, most notably a torn achilles, which derailed his football playing career but certainly not his coaching career. During Marcelin’s time of developing as a player, one of his former coaches knew from the very start that one day he would coach a team of his own. Even if he could no longer play football himself, the coach knew Marcelin lived and breathed football. “If I did not coach football, I would want to do something in football. Football’s my thing.”  Marcelin has been involved with the Hills East Football team as an assistant coach for the past five years, until now.  Marcelin stated that the Hills East community was strong and very supportive. Not only do the fans encourage the team, but so do the students and teachers. Marcelin said, “the athletes help support the teachers by working in the classroom, which will then help our team succeed.”

Coach Marcelin focuses on two main things when coaching, the fans and the players doing their job. If every player contributes to the team and everyone plays their role, the team will excel. Coach lives by one motto for his team: “The talent speaks for itself, just do your job and work on yourself to be the best you can be.” Coach said, “the players have made my job easier by showing up to practice and doing their job, then you’ll see, the hard work WILL pay off.” Coach emphasized the importance of the fans on the impact of the game, he exclaimed, “the fans help bring that 12th man energy.” Marcelin believes the fans have the greatest impact for a team’s success, especially the Thunderbirds. Trust me, the student sections at Thunderbird games really do make the difference.

As a result of Marcelin’s strong coaching abilities, the Thunderbirds have made it all the way to the county semifinals and have finished third in Division II with a record of 7-3 in Suffolk County. Coach emphasized his guys Elias Barrett, Dakim Griffin, Louis Mathurin, and Konadu (Tiny) Boadu, have all helped as players bring this team to where they are today.  Coach said, “all these guys can seriously go to the next level.”