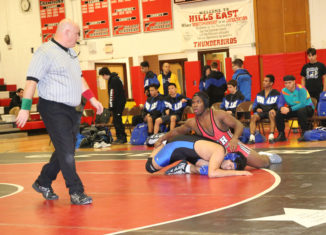 After a strong season last year, placing second in league three and being invited to compete in the dual county tournament, the 2017 Hills East Wrestling team has a lot to live up to. It could be tough due to the loss of Michael Sanfilippo, who went on to continue his high school career at Chaminade, James Spadafora, who is now wrestling at the University of Maryland, and Phil Spadafora, who went on to states last year for his third consecutive season and is now continuing his wrestling career at the University of Maryland.  Despite these losses, the 2017 Wrestling team has their eyes set on a bigger prize than just winning the league champs to taking the title of County Champions. The Thunderbirds are preparing to compete against strong teams, such as Long Beach and Commack, with their tough middleweight line up of Jonathan Spadafora, Tate Kershner, and Ernesto Mitchell. Zach Stern and Yoshia Minor will also be top contenders in the HSE heavyweight lineup. Sajid Pinate and Dylan Campbell, both of whom placed in leagues last year, are looking to dominate again in their weight classes. All seven are not only looking to win the counties, but are also planning to spend their February break in Albany wrestling for the state title at their individual weight classes.

After talking to Tate Kershner, a four-year varsity starter and two-time captain, about the upcoming 2017 season he explained,  “This year is different. We all have a new and changed mindset coming into the 2017 season. A motivated mindset as we all are on the same journey to Albany. The amount of training that the team has put in over the past years is crazy. It’s almost like the grind that we are on never started because the wrestling grind seems to have never stopped. This year is our year being a team with a lot of seniors this our last ride, and we have to put it all out on the mat.”

Rivalry teams will have a tough time dealing with the Hills East Wrestling team as it seems to be that they are a force to be reckoned with due to their top of the line coaches, Phys Ed teacher Mr. Davey and Math teacher Mr.Tuorto. Both coaches have a lot of experience in the sport, especially Mr. Davey who was coached and mentored by his father Bill Davey Jr., otherwise known by many as Papa Davey who is now in the national wrestling hall of fame.  Both of these coaches had major success in their careers, in fact, the two wrestled each during the County tournament when they were in high school. These two coaches have raised and taught this group of boys and have built them up to the wrestlers they are today. They have even held camps and open mats during the offseason to help keep the boys stay in shape for the upcoming season.

The boys start their season with an individual tournament at John F Kennedy High school where Tate Kershner will be looking to protect his title as Sprig Gardner Tournament Champion at his individual weight class. After that, their first home match is against Centereach on December 15th. Come support your 2017 Hills East Wrestling team.