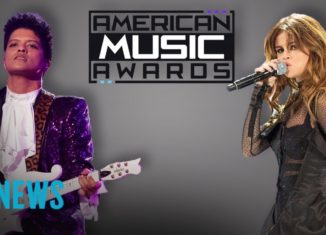 On Sunday, November 19th, the 45th annual American Music Awards were held at the Microsoft Theater in Los Angeles, CA. The host of the evening was Golden Globe winner, Tracee Ellis Ross. Ross is most notably known for starring on the ABC show Black-ish as well as being the daughter of this year’s Lifetime Achievement Award recipient, Diana Ross. The evening was filled with many unforgettable moments, but there were five that really stood out above the rest.

These two artists share a mutual love and respect for each other. Their fans have dreamt of a collaboration between them for many years. During the opening of the AMA’s, their dream came true. At the beginning of the show, Jamie Foxx made a speech about the tragic events that have transpired throughout the past months, including the Las Vegas Shooting. Some of the first responders were there standing with Foxx. As a way to honor them, P!nk and Kelly Clarkson joined forces to duet on “Everybody Hurts,” by R.E.M.  Their voices blended well together, and they both emitted so much emotion. This show opener definitely started the AMA’s off on the right foot.

At the tailend of the night, Evan Ross came onto the stage to introduce his mother, Diana Ross with a video package that highlighted her incredible career. First starting out as a member of The Supremes, she later branched out and had a mega-successful solo career. She is truly a legend. Ross started out belting out a medley of her hits. She begin with “I’m Coming Out” then went on to sing hit songs, such as “Take Me Higher,” “Ease On Down The Road,” and “Ain’t No Mountain High Enough.” By the end of her medley, all of her grandkids were up on stage dancing with her! Ross was later joined by the rest of her family on stage. Her daughter and host of the night, Tracee Ellis Ross, gave a wonderful speech about her mother. Soon, Diana took the mic and gave thanks for the award and said that this moment was all about love. This was a great way to cap off the night.

The American Music Awards are known for making once-in-a lifetime collaborations between artists happen on their stage. This year, they paired alternative band Imagine Dragons and their song “Thunder” with rising R&B singer Khalid and his song “Young, Dumb, and Broke.” On paper, this collaboration seems very odd, and I wasn’t sure how this would turn out. However, this worked perfectly on stage. Both Imagine Dragons and Khalid had great stage presence. This performance was very high energy, and everyone was running all over the stage. Even though each song is very different, they intertwined the two amazingly. The performance even ended with confetti falling all over the theater.

This year marks the 25th anniversary of the film The Bodyguard. This film both starred Whitney Houston and featured her on its hit soundtrack. This soundtrack featured her beloved rendition of “I Will Always Love You,” and it is the best-selling film soundtrack of all-time. Viola Davis graced the stage first to discuss The Bodyguard and introduce Christina Aguilera. Aguilera started with “I Will Always Love You” followed by “Run To You.”  Her vocals are astonishing. Later, she got into more upbeat songs, such as “I’m Every Woman.” A choir came on stage to back her up, and Aguilera noticeably had a great time on stage. This was a truly memorable way to honor The Bodyguard.

P!nk came back out for her second performance of the night: a rendition of her new single and title track of her new album “Beautiful Trauma.” P!nk is known for her acrobatics-filled performances. Leading up to the show, she kept saying that this will be her most daring performance yet. And she was not kidding! Tracee Ellis Ross made her was outside to introduce P!nk, who was suspended from the side of the enormous building. Attached to a harness, she moved along the side of the building as she sang, and she didn’t miss a single note. This performance definitely had me on the edge of my seat. There were some points in the performance when she was literally only holding the hand of one of the dancers as the rest of her body was hanging off of the building. This performance was utterly jaw-dropping. Somehow, P!nk outdid herself. It is very deserving of the top spot as the most memorable moment from the 2017 American Music Awards.