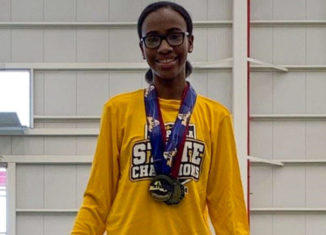 High School East has hundreds of amazing students, but junior Soledad Jean deserves to be recognized as one who often stands out above the rest for her outstanding accomplishments. Soledad is a student at Hills East and one of the best Track and Field athletes the school has ever seen. She holds various titles and is extremely hardworking as she is dedicated to the sport and puts all of her effort into the event  in which she has been so successful.

Soledad Jean, known as Soley by her coach and HSE teacher Mr. Strack, has earned many well-deserved accolades throughout her time at HSE thus far. Soley was recognized as the Top Field Event Athlete of the Year for all of Long Island as decided by the Suffolk Coaches Association, Nassau Coaches Association, Catholic HS Coaches Association, and USA Track & Field -Long Island. She is also the back-to-back Indoor State Champ, and this is her 3rd consecutive season being crowned Champion (Indoor for 18-19, Outdoor for 19, & Indoor for 19-20). On March 7th, Soledad won the Indoor Track & Field State Championship in the High Jump. Her additional accolades include: All-League, All County, All Long Island, and All State.

Soledad was ranked 7th in the nation and was heading into Nationals in an attempt to earn All American honors. Unfortunately, the meet was scheduled for March 14th and was cancelled due to Covid-19. According to her coach, “she likely would have earned that honor, but that’s speculation based on who was registered to compete.” We are hopeful that she has another opportunity to achieve this honor in the future. Soledad’s best jump of the season was 5’8″ which ranks her the 3rd best indoor jumper on Long Island. She is hoping to return next year seeking to defeat the current Suffolk county record of 5’10.75”. Her next closest Long Island competitor cleared 5’4″ which is a huge difference for High Jump. By keeping up her motivation and determination, we have confidence that she will reach her goal and beat the current Suffolk County Record.

Today, Soley is already being recruited by a number of schools including those in the Ivy League, the ACC, and the SEC. The entire HSE community is excited to see where her future brings her as she certainly has a lot to look forward to! We are lucky to have this Track and Field star at High School East and are thrilled that we get to watch Soledad Jean continue to succeed.