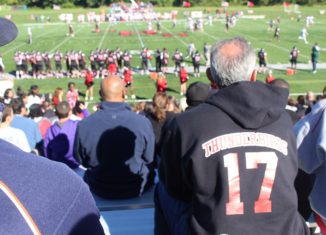 This year’s Homecoming game was held on October 8th. Your HSE T-Birds fought all the way through an intense game with many highs and lows on both sides of the field. The cheering from the packed stands echoed through the rolling hills of the HSE campus as students, alumni, and families gathered to cheer on the T-Birds in their battle against the Huntington Blue Devils. 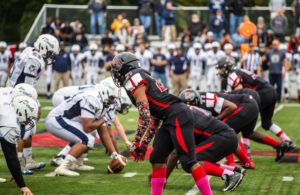 The enthusiasm in the stands translated onto the field as the players and coaches made their grand entrance to much fanfare. Led by Coach Maratto, the T-Birds fought from the kick off to bring home a homecoming win. The motivation and relentless effort of Captains Mike Gunther, Donte Jarvis, Josh Garvin, and Kenny Chavez did not go unnoticed as the T-Birds burst out of the gate and did not stop until the last second of play. Tyler Parkinson, Donte Jarvis, and Mike Gunther each had ten tackles. Josh Garvin came in with three rushing touchdowns, and Kenny Chavez had 200 rushing yards. Another notable contributor was JJ Diggs who had a few tackles on special teams that helped keep the Blue Devils at bay.

Ultimately, the overall score of the Hills East homecoming game was 20-19, with Huntington coming up victorious. Although the Thunderbirds didn’t come back with the win, it was a very close game, and their overall perseverance did not go unnoticed. The team played their best throughout the entire game, and they are looking forward to facing more big opponents as the season goes on. Great job T-Birds!