You are here
Home > School Sports > The Thunderbirds Cut The Nets 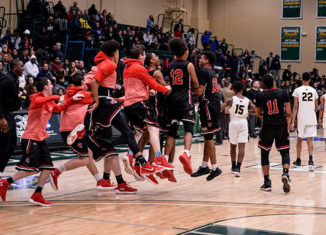 Over 3,500 fans attended the Long Island Championship game to see a show, and they got exactly what they paid for.  The 2018 Thunderbirds have now officially avenged their loss from last year and are your Class AA Long Island Champions. The T-Birds came into this season with a lot of hype following them, and they have certainly lived up to it.  From day one, they were considered heavy favorites to be Long Island Champions. Uniondale was no match for the Thunderbirds, losing 69-54. The Nassau County Champs were not able to make any major stops on defense let alone make a layup on a fastbreak. The Thunderbirds took an early lead and never looked back due to Uniondale’s inability to rebound on either side of the court. Hills East came out ready to play, and it showed on the court and on the scoreboard.

Walking bucket Savion Lewis was the leading scorer of the game with 21 points and 7 assists. His beyond impressive play allowed him to earn the Most Valuable Player award of the Long Island Class AA Championship. Savion’s ability to move the ball around coupled with being a dangerous scoring threat allowed the Thunderbirds to keep Uniondale unbalanced. The dynamic backcourt of Hills East showed up as powerful as it has all season long. The two senior guards, Savion Lewis and Julien Crittendon, had 36 of the 69 points scored by the Thunderbirds. Savion’s and Julien’s ability to change the tempo of the game and score from anywhere on the court gave them the edge over the Knights. When asked about their recent victory and upcoming trip to the State Championship in Binghamton, Savion said, “ My feelings about this last game are just amazing. Winning this game was so important to me because I wanted to bring a Long Island Championship to Hills East after falling short last year by one point. Going into states, I’m very confident that we can win it all; I have so much faith in my team as we are more prepared than ever.”

While Savion and Julien led the team in scoring, the game would not have been won without the tremendous defensive effort from Kenneth Mathurin and Kendall Nero-Clark who clamped down the Uniondale big men and protected the paint, forcing the Knights to shoot atrociously from beyond the arc. Mathurin, who had a double-double in the Long Island Championship with 11 points and 11 rebounds, and Nero-Clark, who added 10 points, were the forefront of major stops on defensive and grabbing offensive rebounds.

The outstanding off the bench defensive efforts by Shamar Moore-Hough and Max Caspi, along with the unlimited range from Shane Dean, allowed the Champion Thunderbirds to put the game away and send Uniondale home with a loss. This game was, without a doubt, won collectively as a team. Every player showed up and did their part in order to secure the win. Countless students and other members of the Hills East community showed up to offer their support for the newly crowned Long Island Champions. The very boisterous crowd in support of the T-Birds undoubtedly gave the Thunderbirds an edge as the enormous crowd made it feel like they had home field advantage.

The Thunderbirds look to continue their dominance and success as they head up to Binghamton this weekend, March 16th-18th. While there, they will continue their final ride and play in the semi-finals of the state tournament against either Niagara Falls or Mcquaid in Floyd L. Maines Veterans Memorial Arena. On behalf of the entire Half Hollow Hills East community, we would like to wish the Thunderbirds the best of luck at the state tournament.