You are here
Home > Sports > The LaVar Ball Show 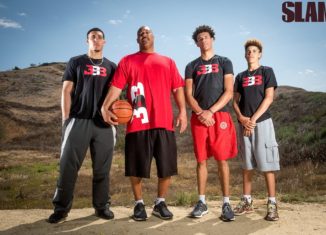 Over the last year, the nation-wide popularity of high school basketball has skyrocketed. Although this can be credited to other big names in the high school basketball world, like Zion Williamson and Michael Porter Jr., it is most credited to three brothers based out of Chino Hills, California: Lonzo Ball, LiAngelo Ball, and LaMelo Ball. The three phenoms first got national attention last year when their highlight mixtapes were released. Since then, their popularity has only been on the rise.

Although the three are all good in their respective names, the most famous of the Ball brothers is the eldest, Lonzo. This past season, Lonzo averaged 14.6 points, 7.6 assists, and 6 rebounds at UCLA. He also led the Bruins to the March Madness tournament; unfortunately, they lost 86-75 at the hands of Kentucky in the Sweet Sixteen. He has since officially declared for the NBA draft and is projected to be a lottery pick.

Although the brothers are making names for themselves, their father, LaVar, is making a name for himself as well, even though it may be in a more infamous way than his sons. LaVar averaged 2.2 points, 1.0 assists, and 2.3 rebounds in the 1987-1988 season with Washington State. Despite the numbers, LaVar has claimed that he could beat Michael Jordan in a 1-on-1. Michael Jordan, widely considered to be the greatest basketball player in history, averaged 30.1 points, 5.3 assists, and 6.2 rebounds throughout his entire career in the NBA. The claim that LaVar could beat Jordan in a game has angered many basketball fans, including Stephen A. Smith, who stated on his television show that there “is something wrong” with LaVar Ball for saying something so “blasphemous.”

LaVar has also claimed that if Lonzo and Stephen Curry of the Golden State Warriors switched positions on their respective teams, the UCLA Bruins wouldn’t have had as much success this season and that the Golden State Warriors would be having a better season. Why? Simply due to the fact that Curry would “shoot them (the Bruins) out the game” and that he wouldn’t be rebounding and passing the ball as much as his son. Curry is currently averaging 25.3 points, 6.6 assists, and 4.5 rebounds this season ad has been the MVP the past two years, causing many basketball fans to disagree with LaVar’s statements.

Not only has LaVar made statements that some could consider to be outlandish, it could be argued that he is also taking advantage of his kids. The Big Baller Brand is the Ball family brand, and it is based off of the three superstars. Without the kids, there would be no profits coming off of the brand. Lonzo Ball is the first athlete to have his own brand before being drafted. In addition, the Ball family is getting their own reality TV show sometime in the next few years.

Throughout all the hype, the Ball brothers have great potential. However, it is yet to be seen if people will pass up on the possibilities that the Ball brothers offer as a result of the negative publicity surrounding their father. This spotlight is most definitely focused on LaVar Ball.