You are here
Home > Sports > The Changing MLB 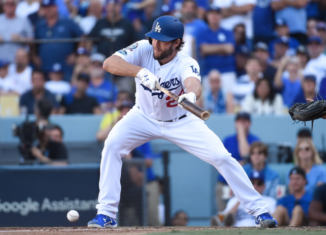 With changes in the MLB and a new era of flashy players and bat flips, I think most people can agree that we don’t need to see pitchers hit. For a number of reasons, this just isn’t necessary. Not only does it create 15 more starting jobs in the NL, but it also lowers the risk of pitcher injuries. It also takes out the pitchers who are awful hitters and can’t even lay down a bunt.

However, there are two main reasons that this NL rule hasn’t been changed yet. A small percentage of baseball fans simply feel that it’s a tradition, and it should stay for that reason. To them, everything is changing in the game, so some things need to stay the same. The second, and main reason, is that the changes, along with the extended playoffs and extra-inning rules, would have too much of an impact on the game. During the shortened season, the MLB experimented with a 16 team playoff and started every extra inning with a man on second. No one should want this because, with an under .500 win percentage, teams should not make the playoffs. Also, starting with a man on second would mean a lousy single could end the game. It doesn’t make sense for the MLB to package these changes together.

Despite this, one change is necessary for the modern era of baseball, and it can really affect the players, such as 40-year-old Nelson Cruz. He hits 40 home runs a season, but he is limited to the DH position only. He is a free agent this year and is limited to signing with one of 15 teams because of the DH rule. This change will really impact AL teams who will have to spend more in a season because they have to put an extra hitter on the field. This will increase their already incredibly large payrolls. The extra hitter also hurts the NL because they might have to put a great hitter on the bench because there is no room for him to hit. The only people that really support this rule are the older fans who have watched their beloved game 50 or more years ago and have seen it change dramatically to become what it is today.  In order to introduce the world to the new era of baseball, the MLB must get rid of the outdated rule and let both leagues have a DH.