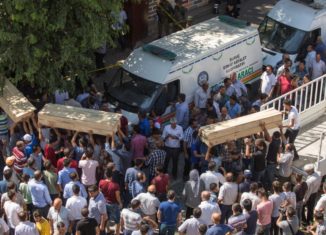 Throughout 2016, Turkey was the target of numerous acts of violence and terrorism. Unfortunately, the nation faced yet another terror attack shortly after the start of the new year. Just minutes into 2017, a gunman opened fire in a popular Istanbul nightclub, killing 39 innocent people not only from Turkey, but also from 14 other countries around the world.

The saddening attack took place at the Reina Nightclub, one of the most popular and high-end clubs frequented by celebrities in Istanbul. The club had accumulated a crowd of between 400 and 500 people, with clubgoers visiting from various foreign countries, as stated by ABC News. According to witnesses, the gunman sought to kill as many people as he could by systematically moving from table to table, shooting and throwing smoke bombs into the crowd. The owner of Reina, Memet Kocarslan, stated, “I believe he has been fighting in war for many years. He was too professional.” Although Kocarslan increased the amount of security in the club for the New Year’s Eve celebration, there was only one armed policeman standing outside of the club, according to CNN. As stated by the law in Turkey, security guards are not allowed to carry guns.

Not long after the attack, ISIS surprisingly claimed responsibility, and around 20 members of the group were detained in police raids. ISIS described the gunman as “a hero soldier of the caliphate.” So far, the police have identified the attacker, but they have not yet released his name to the public. However, the attacker spent two weeks on the run after the devastation despite the extensive deployment of police to prevent attacks at such celebrations. It has been reported that the gunman was initially in the Central Anatolian province of Konya on December 15, and traveled from there to Istanbul to carry out the attack. By January 16, the gunman had been apprehended, and it took less than 24 hours for him to admit to his guilt. A statement from ISIS suggested that the Istanbul nightclub was a target for the attack because it is the location where “Christians celebrate their apostate holiday.” One can only hope that Turkey will not continue to be a target throughout the rest of 2017.